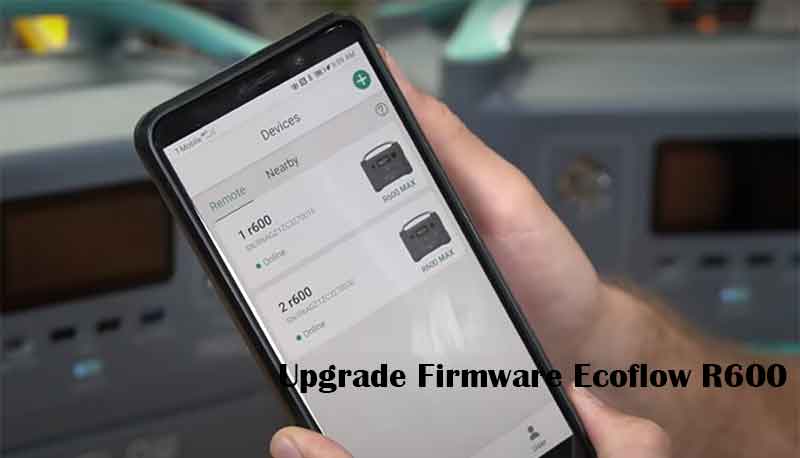 Upgrade Firmware Ecoflow R600 – Today, we’re gonna test out the R600 max for the second time. In the first test, we could not charge while using a load, we cannot use the excellent chaining, we cannot use the UPS function in lots, and lots of other problems.

EcoFlow told me that they did a firmware update, and it should solve some of these issues. Do not pre-buy anything alright, wait until people actually have it. There are actual reviews from people that paid with their own money until you buy a product.

Without further ado, let’s do the software update, and see if they actually fix the problems. So, here’s the Ecoflow app, and it shows both of my units are connected. So, we’re gonna click on the second unit, and I have not updated this one yet.

We go to the system, and we press check updates, and then upgrade. Now, that it’s upgrading, you can see the light illuminate on this unit, and we will come back in a few minutes when it’s done. So, I did the update and they will not turn back on. I don’t understand why so I’m trying to reconnect and they misspelled waiting. There’s two T’s, so they really have not thought through this app that much.

Now, they’re finally connected. Let’s try to control them remotely. Let’s try turning on the light, okay it is not responding. I can’t get it to work. Let’s try the inverter, okay the inverter just turned on for this unit.  Let’s try the DC output, and this one’s not working. So I can’t get the DC to turn on. The AC remote control is working but everything else is not. I thought that it did a system update, but I think it because the version number is not correct.

Upgrade Firmware Ecoflow R600, We do not have the most recent version, so we’re gonna try upgrading again, and let’s see what happens. It is painfully slow, last time it took like 30 minutes, and yes, we are very close to the router. It’s very fast internet here, so this unit was updating for over an hour, and then it just disconnected randomly, and it says device offline, and it was only like 10% of the upgrade going by its little graphic.

RIVER 600 Max
Price: $549.00
RIVER 600 + EXTRA BATTERY = RIVER 600 MAX After integrating the Extra Battery to RIVER 600, you will get the RIVER 600 Bundle which is monitored and managed as a whole by the BMS of the main model.
Buy Product
View On Store

It would take like 10 hours to upgrade the software. I cannot do it, so what I’m gonna try to do is put the standby time to never. It was set to 2 hours, and it cut off after 1 hour, but maybe this might help, and we’re gonna try updating it again.

So, let’s go to the first upgrade, press upgrade, and see what happens after two and a half hours. I finally found a way to update the firmware, but it doesn’t show an updated firmware version number. The reason that I know, that different things are actually working.

Now, I can remotely operate the light, and also the inverter, but the firmware version number has not been updated, but it took two and a half hours for me to update this from where this was very difficult. It would disconnect halfway through. These units should actually be ready for testing, and this firmware update is only for the inverter, but it should help with the UPS function as they said in the email.

Right now, it’s charging at 340 watts and we’re gonna add a 600-watt load. This is perfect 560 watts at the output, in 897 watts at the input. It’s actually working as a UPS which is actually a very good sign. It never did this the first time we tested it.

Now, let’s connect two of these together for UPS function, and see what happens. Now, the AC output is connected to the input of this one, and we’re gonna add a load, and it’s actually working. We have 900 watts going in, over here 560 watts going out, 540 watts in, and 540 Watts going out. So, this is great. I’m actually very happy that it’s actually working. Now, to test this, we’re gonna do a capacity test when these are fully charged.

I’m gonna disconnect the load, let them both charge up, and then we’ll reattach the load, and see what the capacity is small. These are charging.

I’m hoping that this firmware update actually fixes all of these problems. I’m trying to give them a chance, but I’m trying to show you how frustrating this has been. Now, they’re fully charged and we can disconnect the charger, and we can add a 600-watt load, and look at that, it’s actually working, it’s charging this one and powering the loads.

RIVER 600 Pro
Price: $649.00
3 x 600W AC OUTLETS AND 720Wh CAPACITY The RIVER Pro can power up to 10 devices simultaneously with multiple outlet options, including 3 pure sine wave AC outlets. It offers up to 720Wh power and it weighs just 15.9lbs, which makes it a portable power source for adventure on the go.
Buy Product
View On Store

Everything’s good so far. So, let’s come back and see how many kilowatt-hours we have, while I was gone it turned itself off at 480 watt-hours, and this one is completely depleted, and this one at 92%. We’re gonna continue the test.

So, it just turned off because I turned on the first inverter to see if there’s any more juice in the battery, or maybe the voltage and the battery recovered, then it shut down a couple of seconds later. And then disconnected power on this inverter. If you are using these as UPS, you can’t really use it when it’s chained, because it’s gonna be interrupted, and that defeats the purpose of an uninterruptible power supply. If it will be interrupted, so do not put them in more than one unit at a time as a true UPS.

You can watch the video for a better point of views 🙂

I have to give EcoFlow credit for some of the features that this has. This is exactly what we want, and the R600 Pro seems to be the perfect lithium iron phosphate battery. You can expand it with other 12-volt batteries. It can charge quickly, so I think they have the right idea, but they really need to fix these problems.

I really hope that they fix especially, the UPS issue with overload because it shouldn’t be doing that. The inverter is working better, but now we have temperature management issues, and the UPS goes into overload if you chain them.

I hope they fix that in the next update. I’m just running into problem after problem and just updating the firmware to two and a half hours, that was very frustrating, and it is possible that EcoFlow will fix all of these problems, and it will be a good device.