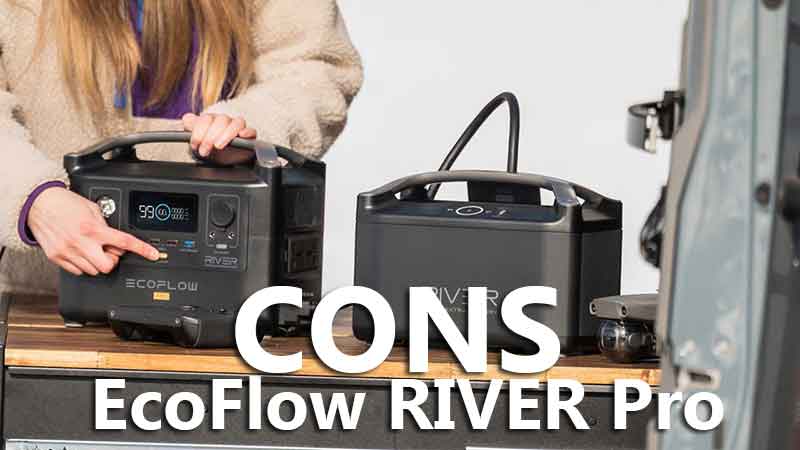 EcoFlow RIVER Pro Cons – Okay, today we’ve got the EcoFlow RIVER Pro. It’s a pretty amazing battery bank, but I want to give you a bit of a perspective that might be a little bit different on this. Now, I’m not going to bore you with too many specifications, because I’m sure a lot of you already know a lot about these devices. I’m just going to give you the main pros and cons.

So, first things first, I want to mention it starts right here on the extra smart battery. Now, for a start, this is a pretty great way to double the capacity of your EcoFlow RIVER Pro. So, at the moment it has 720 watt-hours, you can buy this additional Ecoflow smart battery which will give you another 720 watt-hours. You can even buy them as a pack as we have here. It’s pretty cost-effective actually.

So, what happens when you get this? You get this cable that connects to the side of your EcoFlow RIVER Pro and strains to the top of your Ecoflow smart extra battery. Now, the first kind I want to mention is, this battery just has an ON/OFF button, that’s it. What that means for you is, you can’t charge this separately. For example, if you go camping, you want to leave this extra battery in the amenities block to charge while using your EcoFlow RIVER Pro in your tent, you can’t do that. The only way to charge this smart battery is by catching it up to EcoFlow RIVER Pro and then charging them both together.

Is this a deal-breaker? No, it’s not a deal-breaker at all. Maybe a slight inconvenience, there are also no additional ports on this. So, we see the Bluetti for example, with their newer devices not only you can charge it separately to the main unit. It also has a couple of extra ports in there to help you out. See those USB ports and things like that? So, it’s missing for those little handy things.

RIVER Pro + Extra Battery
Price: $948.00
The RIVER Pro can power up to 10 devices simultaneously with multiple outlet options, including 3 pure sine wave AC outlets. It offers up to 720Wh power and it weighs just 15.9lbs, which makes it a portable power source for adventure on the go.
Buy Product
View On Store

All right, so that’s the first thing. Now, while we’re on the topic. This cable here can be a little bit fiddly, again it’s not the end of the world thing, but you need to actually screw in this old parallel or serial cable like connector into the side of the battery which then goes all the way across here to the top of the battery. So, it’s not really something you can put in a stacked configuration. So, you haven’t really got a tidy package. I think the best way to put these is probably not next to each other like this, you can see it’s a bit awkward with the cable. But you could put this battery on the floor, and then maybe have this up the top, but just something to consider.

Now, the next thing to mention is, this EcoFlow RIVER Pro is not the same as the ones that are released as part of the Kickstarter with the R600. It’s a different device, and it’s actually missing some features that one had I think what’s happened here is, EcoFlow has realized that some of those features didn’t work properly, and they just removed them.

So, the first thing to mention is, there’s no x-link. With the x-link feature, you could connect up to two EcoFlow RIVER Pro in a parallel configuration. You get a couple of cables you know, imagine two of these cables but a lot smaller and plugged into another Ecoflow Pro, and what that would do is, that would increase your inverter capacity. So, the 600 watts would increase the 1200 watts.

Now, a lot of people have tested this and they passed and said it was okay, but it really wasn’t okay. There’s one particular person who find this and gave his honest opinion about it, and the feature just really didn’t work well at all. You were lucky to get 700 watts reliably using that x-link feature. So, basically, EcoFlow just scrapped it for the most part, but the good news is, they introduced an extra battery which I think is pretty great.

The next item I want to mention is, it says here that you can charge it from 12 volts. You definitely can charge from 12 volts, there’s a port here on the side. So, if you open up this flat, see if I can do it with my other hand here, all right, so see that flaps open, so you can see that port here, the yellow one. So, the EcoFlow River pro comes with a cable that you can plug into the charger in the car.

Now, in the specifications, it says that you can use that port up to 10 amps. So, presumably, that would be the 13 or 12 to 13 volts coming from your car at 10 amps that should give you about 130 watts. In reality, it only gives you between 90 and 100 watts. It’s actually 8 amps, I did a bit of digging a little bit of research, I found an Amazon review that also complained about only charging at 8 amps, which let’s be honest, it’s not a big deal.

We’re talking about maybe 20 or 30 differences in charging time, but it’s just something to know, something that it says in the specifications which aren’t true. So, it’s not 10 amps, it’s actually 8 amps, and after doing some digging, it looks like the connector for the cable included in the box was overheating. So, what EcoFlow has actually done is, they’ve modified the app to make sure that it only runs at 8 amps. If you go into the app, instead of seeing options to charge it 10 amps, 8 amps, 6 amps, and 4 amps. They’ve removed the 10 amp option, you can only charge it 8 amps. 6 amps, or 4 amps. There’s no more option for any more charge at 10 amps. I don’t believe this affects solar, this is just the charging from the car.

The final last cons I want to run through, and you know like I said, none of these things are real game-changers, and I wouldn’t even call this a con. But the case has sort of minor weird paint defects which you can kind of see here, I would say it’s probably a good 95 out of 100. I’d rate goal zero having had a few gold zeroes at 100, where everything is perfect. You couldn’t find a mark or a scratch. This is a solid 95 percent, it’s really solidly built with just a few kinds of paint imperfections. But in Ecoflow’s defense, there was a nice sticker that came on it, saying that they used a more environmentally friendly printing method which does result in some defects.

EcoFlow RIVER Pro Cons – Next up, I’m going to release another article just telling you some of the pros. I know, we’ve run over the cons in this article which could be a little bit daunting. I’m not saying don’t buy this battery, because clearly, I have here, and I think this is probably one of the best batteries you can buy at the moment with this capacity. so stay tuned going to be releasing probably next week or the next couple of days another article with all the pros then we’re going to dive headfirst into some real-world testing.