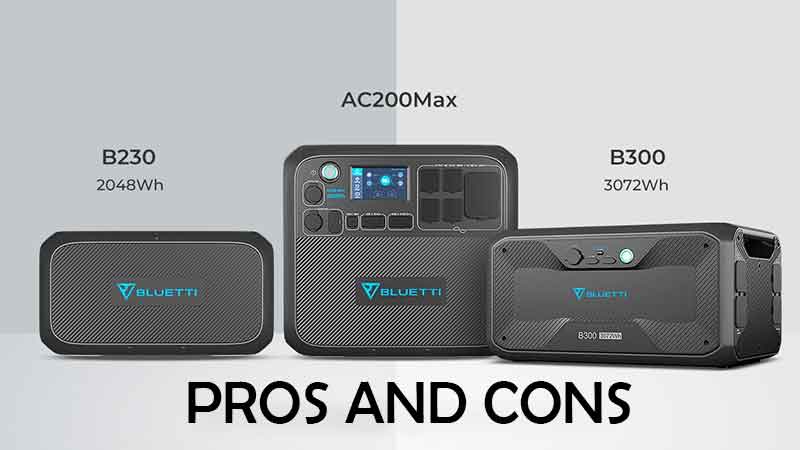 Pros And Cons Bluetti AC200 MAX – This is the new AC200 Max by Bluetti and I’ve literally tested this more than any other solar generator that I’ve ever had in the past. So, first, there are 4,000 watt-hours of expansion batteries which means you can have a plug-in place 6,000 watt-hour lithium iron phosphate system that anyone can build in minutes. Next, the inverter output is 2,200 watts. So, that’s 200 watts higher than the previous model.

Next, the new model can handle 900 watts of solar power input, and that is a continuous duty all day long. On the old model, the AC200P by Bluetti, it could only handle 700 watts which over the course of the day means, that you have 1200 watt-hours or more that you can add to this battery. And, I’ve been over paneling this system for over a month. So, let me show you the solar array that I have connected to this system, and this micro solar array is connected to the Bluetti.

We have three-watt panels in series, 3 x 400 watts. So, even though the max input is 900 watts, I’ve had 1320 watts connected for over a month now, and the moment the sun comes up, I have 900 watts going into that system. This is called over paneling. I am not exceeding the max input voltage of the Bluetti, but the Bluetti limits the input current. This little array cranks out some serious power. We get 900 watts for about six hours a day.

And this is the solar input, it’s connected to an XT90 connector, and an MC4 adapter. So, you can string your panels in series,  and then connect them to this unit. And this is the battery expansion cable, you simply plug it in, and then you slide the small switch forward, and now there’s a connection between the main unit and this expansion battery. But this battery expansion will not turn on until you either turn it on and then the green light shows, you charge it.

How I’ve tested this unit is very interesting, I’ve never done this before. I have the inverters, AC output connected to a 48 volt 1300 watt battery charger. This charges my main solar power system in my shop, then my other solar power system charges the expansion batteries. This allows me to run the inverter 24 hours a day seven days a week with about 31 000 watt-hours every single day. But over the course of the month, I almost ran an entire megawatt-hour through this unit.

And the inverter circuit is a champ, I have not had any high-temperature problems. I’ve run it flawlessly. So, this inverter circuit is solid, and there’s even an RV plug right here. This is only 120 volts though and I really wish there was a 240 volts receptacle that would be very nice also when I first got the unit, I got 88 percent of its rated capacity at the inverter’s output.  The inverter is also efficient, and that includes the total capacity with the battery expansion. So now, that we have all the good stuff out of the way.

Let’s talk about the bad stuff that I found in this unit. The biggest downside is that when you have the expansion battery packs connected, and you discharge this whole system to zero, it will turn off the expansion packs. And if you have solar connected,  and it starts to recharge in the morning, it only charges the main unit battery. It does not wake up the expansion packs. If you want these expansion packs to turn on again, you need to get out the AC adapter and manually charge it, and then turn it on.

In my opinion, that’s not acceptable for a truly autonomous off-grid system. When it gets solar up here, it should be able to charge the entire battery automatically, and this happened this morning. So, you can see how the main units were at 100, and it did not charge, or turn on the expansion battery packs. And I did tell Bluetti about this problem. So, hopefully, they’ll fix it with the software update, but if they do not fix that, that’s a huge downside. I would not personally spend the money on these expansion batteries if they do not fix that problem.

Next, this is very heavy, so heavy in fact, that if someone were to run into it, there was a pet or a small child on the other side,  you could seriously hurt them. I think that these modules should be able to connect together with some form of the locking mechanism. There should be a stand with a wide base of support on the bottom, that way, it will not tip over. Also, personally, I do not like the look of these cables sticking out on the side. I wish there was another way such as the titan solar generator, how they’re internal, so you don’t see any wires at all.

Now, the next problem was very strange. Early in the morning, I came out to the garage, and the screen would not respond to any form of input, and this lasted for 4 hours. I still do not know why it did that I could turn the unit off and back on again. But the screen still would not respond, I could not turn the inverter on, I could not turn the DC output on, I couldn’t do anything,  and I emailed the company, and by the time they responded it was working again.  So, I’m not sure why that happened.

Now, the next problem is I think they should have increased the capacity of the solar charge controller, and they solve that by having these battery expansion chargers with 500 watts of charging power. So, you connect an MC4 adapter right here, and then you plug this in down here. But imagine having multiple chargers, and all of these wires all over the place in multiple arrays just to charge this single unit. I would rather have two conductors going in with a larger input capacity that would be ideal.

Bluetti AC200 Max
Price: $2,099.00 (discount Available On Checkout)
This solar power station is an upgrade from the current Bluetti AC200P. It has the same 3500 cycles, 2048 watt-hour, lithium iron phosphate battery, but with many upgraded features including a new 2200 watt pure sine inverter
Buy Product
View On Store

Pros And Cons Bluetti AC200 MAX – Personally, I would not buy this system with the expansion battery packs. But the main unit is very powerful. I really like this as a standalone solar generator. It’s incredible, this is literally everything that the AC200P should have been previously having lithium iron phosphate. We have 900 watts of solar, and for this size of battery that’s fantastic. You also have a good AC output. I also forgot to mention that I ran a 2,500 watts load through this thing for a few minutes without a problem.

But having the screen lock up for no reason scares me a lot. So in my opinion, I would wait three to six months until they sort out all the software issues that were a problem in the past models, and I’m pretty sure it’s going to be a problem in this model. But once Bluetti solves all the software issues, usually they have very good systems, now would I personally buy this or the Ecoflow Delta Pro.