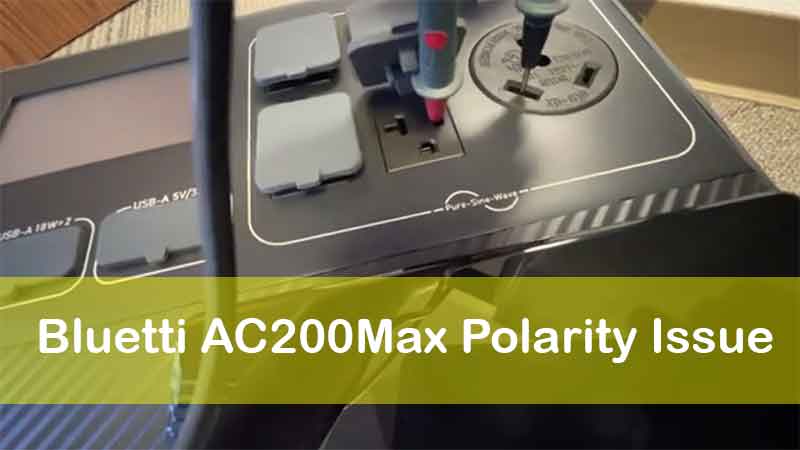 Bluetti AC200Max Polarity Issue – How to check if you are affected – A lot of questions about the AC200max. They’re saying that maybe it also has the problem where the 30 amp RV plug is polarity, is reverse, and now for sure, it’s not. So, I’ve actually been hearing that for a while now a few days for a couple of weeks, and I just hadn’t had time to check it.

How to check if you are affected

Now, that I’m here, I think, it’s actually also playing with it. So, here is one way if you bought this unit, and if you’re waiting to get it, or you even have it and you’re wondering how you can check to see if yours is playing with that. Because apparently not, maybe not all of them are plagued with the problem. Here, I’m going to show you one quick way to check to see if your plug’s polarity is backwards on your unit.

So. let’s do this. Okay, so here is my uh Bluetti’s AC200, you turn it on, and then you turn on the ac circuit. So, according to this picture on the internet, that’s hot and that’s neutral on here. So, we’re just gonna check. Okay, so we go to AC on. Now, it’s on, you’re gonna need one of these to check the polarity, and I’ll link this to Amazon, so where you can buy one. Okay, so there we go, when the one in the center is on, and that’s the only one, it means that it’s open ground, and that’s to be expected. Because this is a non-grounded unit.

So, what you’ll need to do is get one of these, It abounding ground, bonding a plug, also available on Amazon, and this just connects the neutral to the ground, and there we go. See, so now the two, ones like this, you look at the little key there, that’s correct wiring.

Okay, the next step is, you take these off, and you turn the unit off. So, according to this, see, these are backwards. The small pin that is hot and on, so that one and that one should be connected together, and the way I’m going to check. So, I’m going to see, I’m checking continuity from now on to that one. This one to that one, and if it’s connected then we’re good, but if it’s not connected then it’s backwards.

So, in order to do that, you just have to use any multimeter, that is set to continuity, and I have the one that makes a sound. Okay, then we put it on the small connector, and that should be connected to this one. But it’s not, if it’s connected to this one then it’s backwards.

And here’s the other test, I mean this is the same, I guess. It sure is, it seems as this unit is also plagued by the reverse polarity only on the 30 amp RV plug. So, another way to check this is probably an easier way to do this. If you don’t have a multimeter,  just to get this thing and an adapter from this from that plug to this plug, and then you just plug it in there. You will also need the bonding cable. If you want all, just to make sure, that you have the 2 lights, it’s not 100 necessary, but if you just wanted to check that it is wired correctly 100, then you would need all three of these little devices.

Now, you might be asking yourself the same as me, how is it possible that two different companies have a brand new product where they use this plug for the first time and they both get its polarity backwards. And the answer is, I don’t know. Maybe because they’re the engineers are in china, maybe they use the same firm to advise them, maybe on how the U.S grid works and that firm maybe has wrong information, maybe they googled the same article or the same picture showing them the polarity of that particular plug. And they both I don’t know, but it’s very strange, but it is the fact that both of these companies which are not affiliated apparently, from what I know to each other, they both got this wrong.

Now, EcoFlow has fixed the problem before they ship most of these units. Now, I don’t know Bluetti, from what it seems is a lot of you guys are waiting for these units. They’re either on route to you, and a lot of you have already taken delivery of them. And I don’t know how they’re gonna be. I know that they mentioned that one way to fix it would take about two weeks for you to ship it. The U.S based is in Las Vegas, servicing location. And they would do the work thereof changing the polarity of that.

Bluetti AC200Max Polarity Issue – I’m gonna do a teardown of this unit, and then I’ll have a chance to look, and see how hard it would be for an average DIY person. To do that, it’s going to be up to you guys to take that risk and do it. You might void some warranties, I don’t know the warranty of Bluetti. But if that’s the case, at the very least as an education, I will show you what it would take when I do the teardown of this.

I think it’s interesting, and I think it’s unfortunate that both of these units have the same problem. But it shouldn’t be that big of a deal to fix. I know that sending your brand new unit that you’ve been waiting, now for a few months down to you, Nevada –  Las Vegas – Nevada for repair it’s just not ideal. And I know it’s going to be annoying to a lot of you, but it is what it is. I’m sorry to be the bearer of that news, and I should have checked this before.

With Ecoflow, I was able to catch this, I mean, it wasn’t me, I’m not going to take the credit. It was my readers when I did the teardown. They say that this cable was backwards and it was wired backwards, and they let me in now in the comments right away. And I let the folks at Ecoflow right away know that this is a problem that my audience has caught had I done a tear down this early.