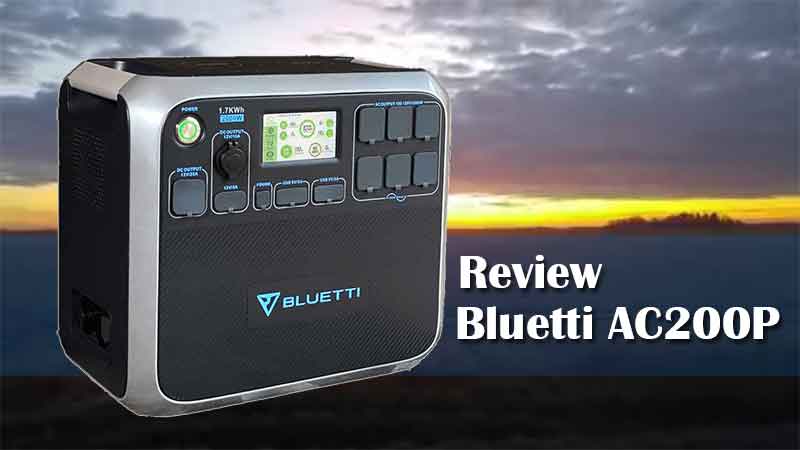 Review Bluetti AC200P Solar Generator – So, we recently decided to make some upgrades to our existing power setup in the van. This is the AC200p solar generator. It’s a 2 000 watt-hour lithium-based solar power station. In the van, we currently have the EB240, and it’s been really awesome for us. It’s met all of our needs. It actually is a slightly bigger power capacity than what this guy has, but at the same time, this one has quite a few additional features which I think are going to be really useful for us, on the road.

So, we decided to make the upgrade, and I’m actually going to put the EB240 in the van that I’m currently in the process of converting. I’m getting really close with that one, really making some progress with it, and hopefully, we’ll be done in the next couple of days. I am planning to install this, hopefully, tomorrow morning in that van. So that the owner will be able to use it to take trips.

It’s a pretty solid amount of power. I think it’s going to work really well for him, and I obviously didn’t want it to go to waste, and then getting this one set up this afternoon is going to be quite the process. It’s a little bit bigger than I was expecting. When I was looking at the package, I didn’t really actually look at the dimensions and measure everything out. But unfortunately, it’s not going to fit above where we have the EB240 currently, which is probably a good thing. Because that is a lot of weight to have upright above our heads while we’re driving. It should probably be lower in the van anyway.

So, this is gonna actually go underneath the bed behind me, and then that’ll free up all that space up there for extra storage which is definitely a good thing. And should kind of streamline the whole system. The only issue is, I’m going to have to move all of the wirings around which I basically just redid like a few weeks ago up there. I know, it was only a couple of seconds for you, but for me, that was quite the challenge.

Getting the new Bluetti into this compartment, it’s basically the exact same size as the hole that I have. So, lowering it in was like this, very precise movement. I was trying not to drop it on the floor. I mean things like 50 pounds. So, just trying to finagle it, and get it in the right position was not easy. I had to move our old inverter for the house battery that I have in. And reposition it on top of the Bluetti.

I did free up a bunch of space up, though this whole area is basically completely empty now. So, we’ll be able to definitely use that area for more storage. it should be more efficient up there, and I really do think that there are some serious benefits to having the AC200 over our old EB240, even though the EB240 was really great. The AC200P has a 2000 watt pure sine wave inverter which is quite a bit bigger than the inverter that is in the EB240. So, we’ll be able to use bigger appliances.

See if we want to get a small blender or something like that, and start making smoothies. My wife really likes smoothies and that’s something that she really wanted to have in her sprinter, but never was able to do, because the inverter was too small in there. That’s definitely an option for us now. And then, just overall, this thing is just a little bit more efficient. It has 6 AC outlets on there, as well as multiple different 12-volt outputs, and then the inputs are actually probably my favorite feature.

Overall the solar power adapter is what we’ve been using primarily to charge up our Bluetti. Especially, if we’re at a campground, or even while we’re driving. We plug it into our pure sine wave inverter which runs on our house battery that was already in this van when we bought it. And that actually works to charge while we’re driving. The ac adapter for the AC200 will charge about 2.5 times as fast as the old one did, for the EB240.

And then, what’s really cool is, that it will charge on that AC adapter while also charging off the solar at the same time. So, even if it is a sunny day, we don’t really have to sacrifice and switch one or the other. It’s just going to be able to put a bunch of power into this thing, and it should be a lot easier to recoup what we’re using on a day-to-day basis. There are definitely some really cool features of the AC200P here.

It is also expandable, I believe. So, if you ever want to add another battery, we would be able to expand that total power. And I think, it can take up to 700 watts of solar at any time. So again, if we want to add more solar to the roof, I don’t really see doing that, but maybe in the future, build if we move this thing over that it’s definitely going to be really helpful for us, on the road. As I said, the EB240 is a really solid option. It worked well for us. But I think, this thing is going to make things even easier, and it’s just going to be a better option for us while we’re traveling around.

Solar Generator For Home: How To Power Your Home

DELTA vs DELTA 2: What’s the Difference?