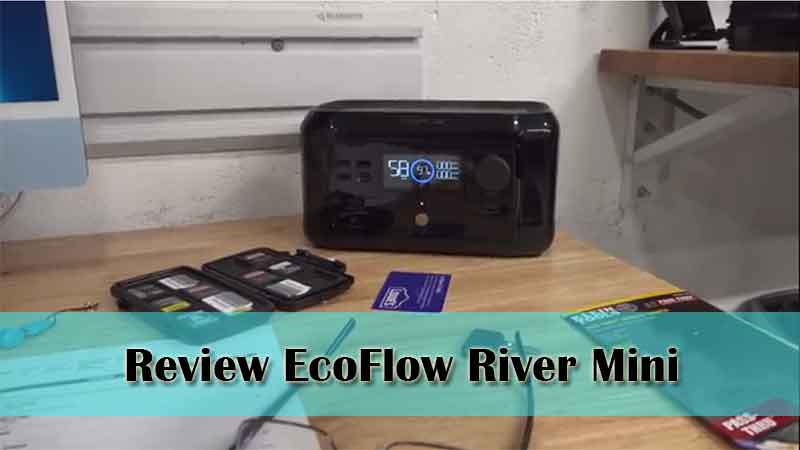 Review EcoFlow River Mini – This is a brand new power station from EcoFlow called the River Mini, and it’s just over 6.5 pounds. This is the lightest unit that they’ve ever produced but is a small station like this, actually worth buying. What could you run with it? And what kind of features do you get in such a small unit?

The main use for one of these River Minis is to be a grab-and-go type of power station. This isn’t going to power your whole house. But if you’re somebody that camps, this can easily fit into a gearbox, and you’ll still have room to spare. You could slip it right into a backpack, take it hiking, or anywhere else that you want to go.

On the front of the device are 4 USB ports including 1 USB-C rated for 100 watts. Now, that’s going to be important if you carry a notebook because you can likely get rid of your AC adapter and just charge it directly off the River Mini. And if your device supports wireless charging, you can use the pad right on top, and skip the cables altogether. And what makes this different from just a normal battery bank is, that you can also run devices that you normally plug into the wall.

Now, this is capable of running a device that uses up to 300 watts. But this model has a special feature that allows you to run appliances that actually use a lot more power than just the 300 watts now. They call it x-boost. It works with devices like toasters, heaters, or even something like a coffee maker, and this is a perfect way to test it out because you might actually want to run one of these if you were out camping.

This normally uses 700 watts of power. It changes the type of voltage, in a way that the coffee maker can still actually work. It might take a little bit longer, but you can get the job done. And led light bulbs use a lot less power, so you could power one of these using a River Mini for about 13 hours. You’re not going to be able to run a full-size refrigerator, but this portable cooler has a real compressor inside, and it also is equipped with a battery.

But for this test, I removed it because I wanted to power it completely off the River Mini. And with the compressor running, you can see I’m drying about 51 watts of juice, and I could run this for about 3 – 4 hours. The refrigerators are different, they don’t stay on all the time, they bring it up to temperature, and then the compressor shuts off. So, in most situations you could run a cooler for about 12 hours, CPAP devices are medical instruments used to help people breathe easier while they sleep.

You’d want to set it to the lowest setting which would use about 40 watts. As you can see, by that smart display, you could run this for about 4 hours. You could also run an electric blanket or even a small heater. This one uses around 275 watts of power. So, you’re only going to be able to use it for about one hour. Now, for most people, that’s really not going to be helpful, and an electric blanket might run for about three hours.

But this is just to show you that you could actually power something like that, and when the battery runs out, you’ve got to recharge it. They’ve given you 3 different ways to do it. Now, the quickest way is, just grab the power cord, plug it into an AC outlet, and charge it up. It’s gonna go from 0 to 100% in just an hour and a half. That’s really fast. The other benefit is, you don’t need one of these AC bricks.

Every other competitor on the market uses these, and it’s just something extra to carry or lose. You can also charge this right from the sun using any common type of solar panel up to 100 watts. They give you the cable right in the box. But if you’re driving someplace here on your boat, or even in an ATV, you can use this 12 volts power cord to charge it up as well. And it takes about 3.5 hours. If your unit is at zero percent.

The other thing I like is, the display it’s bright easy to read, and it’s the same display that they use on the Delta Pro, except that one costs 10 times as much. And it’s not just for looks this thing tells you the exact battery percentage, but when you plug it into a charging source, it’s also going to tell you how long it’s going to take to charge in minutes.

And for such a small unit, they do pack in a lot of ports. The small panel here can be easily opened up, you can even remove it if you wanted. But it’s nice to protect the ports when they’re not in use. Now, that bottom is going to be where you charge it up via a wall outlet, and that top port is going to be where you’re connected to a solar panel, or to your car’s cigarette adapter. You get two standard AC outlets, and you can plug anything in.

That has that grounding pin or just a standard plug with the two blades. You’ve also got a 12 volts accessory plug on the front. This is the same thing that you have in your car. You could plug anything into like a charger, or even a small fan. I also verified that all those AC outlets were putting out the right amount of voltage and the correct frequency. But more importantly, that they’re also putting out pure sine wave power. So that means, this thing should be safe for any type of sensitive electronics.

Another clever part of this design was the integrated handle in the back doesn’t stick out the top, or get in the way. But it’s there anytime you want to pick the unit up. Another feature they include that you never see on these small units is, full app control. It’s the same app that they use in their entire line, So, you can do things like setting the display timeout, turning ports off and on, and a ton of other settings including firmware updates.

And finally, Review EcoFlow River Mini for the price. They’re selling this two different ways: the wireless version is 349 dollars, and a non-wireless version which is exactly the same, it just doesn’t include the wireless charging pad on top and that one’s 319. Both of these products are available now. They’re not any type of Kickstarter, so you can order them whenever you want.