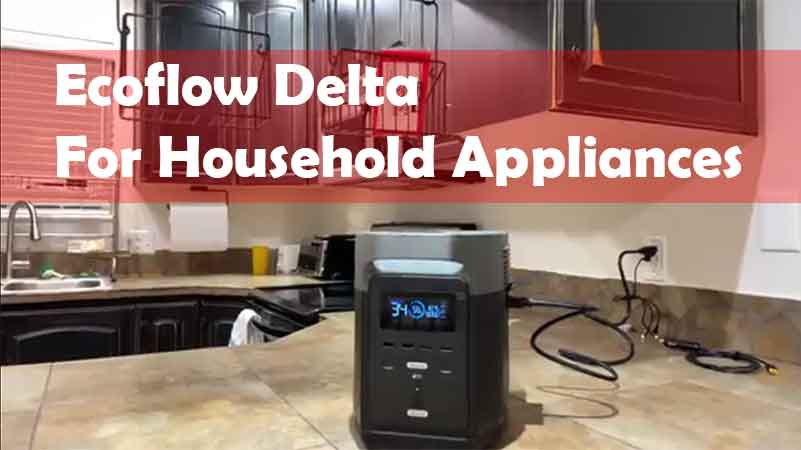 However, the battery will not last forever both in long-term life and short-term capacity. As a quick side note, I was rather disappointed in how I received the package. As you can see, the outer box, it came in wasn’t held together. This doesn’t have anything to do with the power station, but it is disappointing that being said. The rest of the packaging was very nice and protective. The power station comes with three charging cords, one for solar, one for charging it in your car, and one for charging it from the wall in your house.

It also comes with the instruction manual which I found very helpful. A thin protective bag to keep out any dust particles, and a few other small items. This is what it looks like. And sounds like when it is charging, because I had just received the power station outside from the cold and shipping. It is charging at a much lower rate at about 670 watts at 52 percent because it is so cold. In the second clip, once it has warmed up on another day, you can see it’s charging at about 1075 watts which is an insane amount of power.

1. EcoFlow Delta And Blender and Toaster

For the first test, we are going to use my blender to blend a smoothie and see how it does on the power station. Not one issue, it worked just fine. Now, let’s see how it works on this toaster. The reason why I’m doing these first tests with the power station plugged into the wall is to show it is fully capable of UPC uninterrupted pass-through charging. You can see the input is about 1080 watts, but once I turn the toaster on, it jumps clear up to 1800 watts input with about 700 watts output, which means it can power whatever you want and charge all at the same time.

A lot of people are interested in this to use as an emergency system. You could plug in your power station to the wall and then plug your freezer into the power station, that way if the power ever went out, your freezer can continue running uninterrupted and you won’t lose your frozen food.

Now, let’s test my full-size 1700 watt microwave. The Ecoflow R600 would not power and understandably, so it is only rated for 600 watts with the ability to power up to 1200 watts at a much lower voltage, so 1700 watts was out of the realm of possibility. As I fully expected, the delta 1300 powered the 1700 watt microwave with no problem at all. After about two seconds of running the fans did kick on, but they were unnoticeable.  Also notice, I don’t have the delta plugged into the wall charging anymore, proving that it powers the full-size microwave completely on its own.

Next, let’s try powering my fridge and freezer combo, which is what I would be using this power station for in an emergency. The fridge and freezer combo by itself pulls about 130 watts running. But I was shocked to see when I open the fridge door, it jumps to 175 watts. I’m not sure if that’s simply the light bulb drawing that much power, or if the fridge shifts into a higher gear every time the door is opened. Either way, it seems to be inefficient that way. This is my toaster oven which draws a lot of power about 1400 watts. You can see, the delta powers it just fine as well.

Another test I wanted to do was my vacuum. It’s nothing fancy, just your very basic cheap vacuum from Walmart. It pulls about 700 watts and runs just fine.

For my last test, I’m plugging in my 50-inch smart tv. It doesn’t draw a ton of power, and you can notice that it can run for about 30 hours that’s 87 percent which is more than plenty.

5. EcoFlow Delta And Others

The last thing I want to show is how I’ve set up the delta for my house. I have my lamp, phone, and watch charger as well as a security camera, and laptop, all running off the delta, then I have a solar panel in the window that charges the power station. This way I can save just a little money on the electric bill and I’m prepared for a power outage with the solar panel and can run and charge the necessities of life. It’s good to charge it through solar at such a low wattage which helps preserve the battery longer. I also plan to use the delta for camping purposes to power lights, a small microwave, fridge, and other small devices.

Overall, it’s really nice to have such a big inverter that can handle pretty much whatever you can throw at it. Now, let’s talk about some things I don’t like about the delta 1300. The battery is very low efficiency, in the manual it says has a 1260 watt-hour battery with only 1008 watt-hours usable, which is about 80% efficiency. In comparison, the Jackery 1000 has about a 93% efficiency which is much better.  The other thing I really don’t like is the poor lifespan, which after about 800 cycles, the battery only has 60% of its life. The remaining others like the Bluetti are rated for 80% remaining life after 2,000 cycles which is considerably much better.

Overall Ecoflow Delta For Household Appliances, what I really love about this power station is that it can power almost anything you would want. It’s quite portable for all that it offers, and it’s a great application for emergencies and camping. I also love that it can charge with a solar panel at a lower rate which increases the lifespan. So, is it worth it? There are others on the market with better battery capacity for the price, the direct competitor is the Bluetti eb150 which has a 1,500 watt-hour battery, but only a 1,000 watts inverter. So, you really need to decide if you want a bigger inverter or a bigger battery. It’s hard to find both in the 11 to 1400 price range.