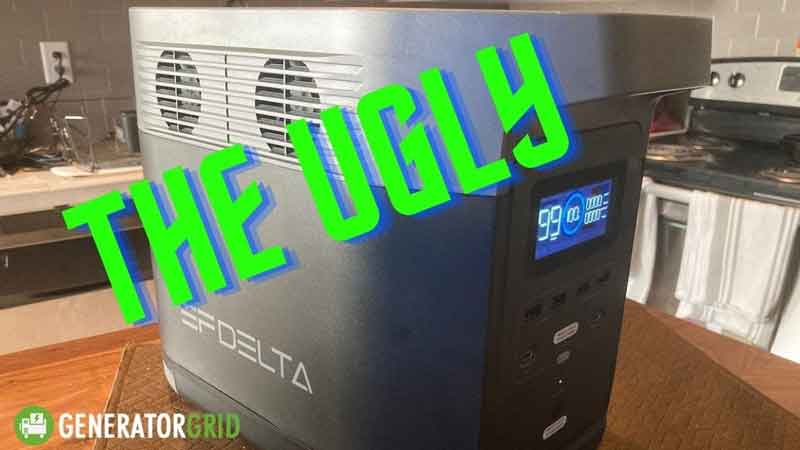 Cons EcoFlow Delta 1300 – This article wants to cover the things that I really don’t like about the EcoFlow Delta, and there’s a lot to like here. This stuff that’s just I’ve had for about three months now, and some of these things just drive me nuts about this thing.

This thing is so technologically advanced in its charging method, that it kind of overshadows. This stuff just really bugs me.

1. The placement of ports

Okay, the first thing is the placement of ports on this thing. You look at the front, there’s nothing here except for some giant fans, which we’ll get into in a second. But to actually turn this on, you have to go to this side, hit the on-off.

The second thing I hate, I don’t hate, but dislike. You know, as soon as, I turn ON the AC, you hear that the fans are kicking on. There’s not even any draw coming out of here, and the fans are already starting to kick on this thing gets really loud fan, when it’s starting to run, when it’s charging.

So, the second thing I don’t like is just the general noise. The fan noise of the device. I’ll show you more of that, but the first thing still we’re not even done with the first thing, and that’s port placement. We’ve got the power button on this side, and we’ve got the DC ports on. They are the AC ports on the other side here.

Third, we’ve got a whole other side here, and that’s where you have to insert for charging. So, it’s just you want to plug in one side here, and then you got to turn it ON over here, and I’ve just found myself constantly having to pick this thing up.

This thing is not light, and moving around. So, really bugs me about this is, is the port placement. Would have been really nice to see everything on one side like this, everything on one side. This is one thing I love about the Jackery 1000, may not be able to charge like this thing, but just ergonomically, and just using it a day today.  The port placing is so much better.

Okay, so back to the EcoFlow Delta, let’s charge this thing real quick, so you can get another example. The other thing that I really don’t like, we have this thing plugged in. Okay, I should have drawn this down a little bit to test this, but when it’s charging fully charging, the fans are just full bore, really going at it.

So, that’s the third thing is, just the overall noise, so port placement really poor, fan noise second thing. Maybe that’s the second thing combined. I guess the other thing I don’t like, it’s got these, it’s got six AC ports, but it’s really only got three ground spots.

You can only put three grounded things in there, and they’re kind of open. So, you can put them both ways, that’s fine. It’s just ergonomically, this thing is not the best. I don’t like these handles. They’re just they get in the way sometimes, look at this, I’m like breathing heavily if you want to put like a larger AC,  thing up this way, then these handles are getting away.

So, I just ergonomically, it’s not my favorite. So, I’ll say port placement number one thing, I hate second is fan noise, that just gets crazy when you’re charging, and also when you’re doing output on AC, and then third just overall ergonomics not my favorite. I’m gonna stop here because there is a lot I like about this thing, but those are the three major things that really bugged me about the EcoFlow Delta.