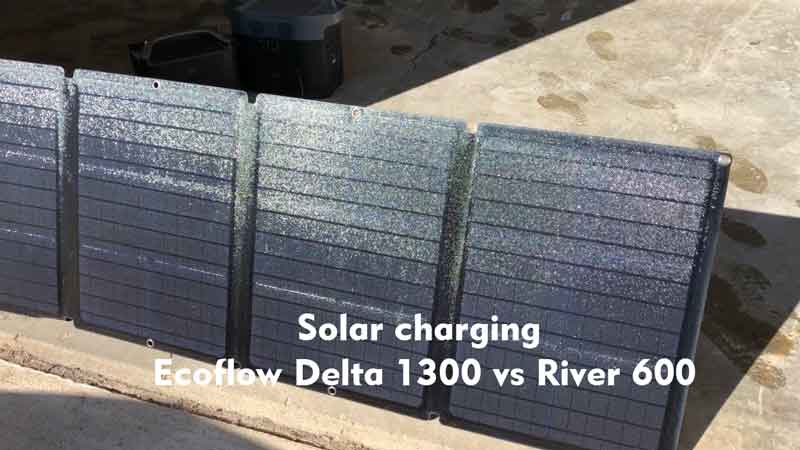 Solar charging Ecoflow Delta 1300 vs River 600 – Today, we’re going to do something I’ve been dying to do ever since I got these two units the delta 1300 and the river 600 portable power stations. I’m going to hook them up to solar panels, and see what the difference is between the two. One of the huge perks of these portable power stations is that you can hook them up out in the wilderness completely off the grid, and charge them from empty all the way back.

So, let’s see how easy it is. Let’s see what the difference is between the two units when charging, and just see how it goes. All right, so I’ve got them resting here precariously against my canon lens case. So, you can see a little daylight. It’s about two in the afternoon, as you can see, these panels have a texture to them which is kind of interesting because the ones on my roof are nice and smooth.

Obviously, they’re glass, this is plastic. You don’t want portable panels being glass, but I don’t understand this texture. It’s really interesting, but anyways, these are connected. This just is attached permanently, and then you just plug them into these little connectors here. They’re super easy, hard to do one-handed, just take my word, this cord comes with either unit, the river 600 or delta 1300, and they just plug right into the side.

Let’s see, they’re both at 41 right now, which does it’s an arbitrary number. Because there’s a huge difference in battery capacity. This one is 576 watt-hours because it’s got the extra 288 watt-hour battery pack to add to the bottom. This one is about, I believe it’s like 1280 watt-hours huge difference between the two from 41 percent.

It’s gonna take nine hours, so that’s not terrible nine hours of direct sunlight. That’s pretty good. So, I’m pulling 79.78 watts now, when it was laid flat on the ground, I was getting nearly half that. So, it really helps to position it towards the sun, and here’s what I don’t understand when I bought these two, I was told that first of all, I didn’t buy either one of these to charge via solar.

It was just a perk, I’m probably not going to. I don’t know, I might know, that I’ve tested out. it’s pretty easy, maybe while camping or something like that, but I just can’t imagine burning through either of these unit’s capacity, over the course of a camping trip. Because, I don’t do like deep backwoods, backpacking, or anything like that, not that I’d want to carry this thing out anyway.

RIVER 600 And Extra Battery Bundle
Price: $549.00
RIVER 600 + EXTRA BATTERY = RIVER 600 MAX After integrating the Extra Battery to RIVER 600, you will get the RIVER 600 Bundle which is monitored and managed as a whole by the BMS of the main model.
Buy Product
View On Store

That’s ridiculous, but anyway, it’s just an added little perk that you can charge this with the solar panel. If you really need to, like something unplanned happens, I don’t know hard to tell, but all right, so I was told that this unit. The delta 1300 would be the better of the two for solar charging because it’s got a higher maximum input of 600 watts.

So, that comes down to 65 volts at 10 amps. Okay, maybe somebody smarter than me can explain this to me. This one is 25 volts at 12 amps, that’s about 300 watts, so 600 watts maximum, 300 watts maximum. This panel is only 110 watts, and you’re never going to get that full 110 watts while charging. There are efficiency losses, so I’m guessing the max is somewhere around 80 watts because that’s what I’m getting from direct sunlight.

Temperature ambient plays a role, there to the length of the cord plays a role. I’m just using the bare minimum, so at one time, I was pulling closer to 80. I know what the difference is, the sun’s probably just slightly angled differently, slightly angled in a different direction. So, here’s the part that I don’t get somebody out there who’s an electrician, or an engineer, or something.

Let me know, it seems like, I’m well within the maximum, because this is only a 110 watts solar panel,  watch this, 76 watts is what I’m pulling on that one. If I hook it up and put it directly into this same panel, I was averaging about seven or eight watts less on this unit. All right just as I suspected, I changed the angle just a little bit. This looks like, it’s more of a direct angle towards the sun, and I’m suddenly getting 84 watts again.

All right, you saw how quickly I unplugged and replugged, super easy 92-93. It’s a pretty good direction. Now, it’s seven, eight hours, you get the right direction. You get more watts, you knock off a couple of hours of charging. That’s pretty good. So, it doesn’t seem close to hitting it, I thought, I would. If you are going to max out, either capacity on either unit, you’re going to end up.

You can daisy chain like four of these, five of these things, six of these together. I’ll have to look at the spec sheet, I think you can daisy chain more with this one than on this one. But, I think, that’s the only way you’re gonna truly max them out. So, perhaps this one’s just less efficient at charging than this one. I don’t think I’m hitting the maximum charging rate, because I’m well under 300 watts, and well under 600 watts.

You can watch the video for a better understanding.