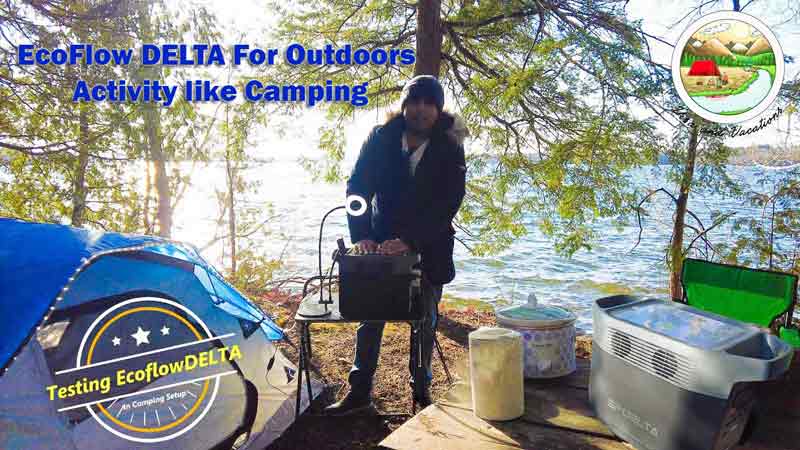 EcoFlow DELTA For Outdoors Activity like Camping – Today, in this special article, I’m going to introduce to you a very special product which is like a special gift to all the outdoor enthusiasts who like to be almost outdoors, and respect the outdoors, and still are more like still have the technic tech gadgets and everything.

We do have an ex, if we do get some electrical gadgets which can elongate our journeys without any hassle, and if you feel like home what nothing like it. So, it’s a marvelous gift to us, and I would say, it’s really it’s. I’ve used it for the last 10 days and it’s a really good product. So, I’d like to introduce you to the Ecoflow Delta, and this is like 1800 watts.

It has an led panel in front of it, I’d like to tell you some of the key features of this product. So, this product has this extreme charge capacity capability which is also called an extreme charge. It charges from zero to eighty percent in one hour, and this is the fastest in the market among its peers.

So, as you can see, it’s zero percent. I have drained it intentionally, and that’s the timer. I will put it on for an hour, and I’ll see how much does it gets charged in an hour, and the second product feature, I would like to bring up to you is, its x-boost technology which is like it is 1800 watt product, and it can be used with like the div tools or the kitchen appliances which are 1800 watts.

It is advisable to use the products which are 1200 watts, or lesser for a longer run, and for better performance. Ecoflow Delta can be used with 13 products simultaneously to recharge them, and it has various kinds of USB ports, and USB type-c ports as well. Also that you can just feel at home, and you can recharge any type of device, like a smartwatch, or an appliance, or an Apple iPad, or any device.

There are two more cables that come in the pack, one is the cable which you can use to charge the Ecoflow delta from the solar panels, and you have to purchase the solar panels separately extra, so that doesn’t come in the pack. And the second is, this cable is the car lighter cable charging cable. So, you can use this to charge the Ecoflow delta from the car lighter.

Apart from that, there’s this bag that comes in with these solar parallel chargers. You can charge Ecoflow delta in four hours, and with these 24, 12-volt car chargers, you can charge this Ecoflow delta in 10 hours. Apart from that, there’s another feature that there are some fans to cool this down, to pull down this device when needed. It’s like automatic, it works on its own. So, these are some very good features of this device.

Let me show you how it works in the practical world right now. I am outdoors, and I’ll show you some of the devices, and some of the appliances working right outside in some cold temperatures. I’m gonna use this Ecoflow Delta and should show this device to you how this device is gonna put some life, and light on my cam.  This mini cam which I have arranged right now, and start using this device.

So, let’s switch this on. This is the switch ON button, okay, so it’s 99 hours, 100 batteries, zero input, zero output. I have this, there’s no input right now, no output. So, first thing, let me switch on, put on some lights. This is the USB, and to switch it on. There’s just ON the button right here to put on, so these are ON.

There it’s some sunshine right now, and it’s too windy. So, my tent is also moving, so it’s not taking much power is this the two watts, and okay, let me put some heavy devices on, right now on. Test it for real. Okay, I’ve been using this extension and this earth protector for my devices. This is a 500 watts rice cooker, slow rice cooker, I can pot slow pot, I can cook many things on it.

Let’s just go ahead, and so, I’ve plugged this thing, let me switch ON this AC button, the light is ON and it’s still a hundred percent. It’s taking 181 watts, but I can switch this spot regularly ON for seven hours.  So, the spot is ON, the lights are ON, let me put on some more devices, put on my laptop charger, and it’s still 179, 180 watts.

And again, it will go ON for seven hours, let me put ON some electric kettle. So, this is the electric kettle, I’ve already put some water in it, and it’s ON and it’s boiling. So, as of now, it says it’s taking twelve hundred, and seven, six, five, four. So, approximately 200 watts, and it will still work for a straight one hour.

This is good, this is nice, I wasn’t expecting this to work for one hour. I was expecting this maybe 20 minutes, 30 minutes, but it’s amazing. If this can work for one hour, I can survive with this for at least a day or two in the wilderness, and with the van, I can go on with this for two weeks. I can charge it again and again with my cigarette lighter charger, and with the solar panel charger.

You never know how long you can go on with this, so this thing is amazing. I really like this stuff. So, at this present moment, I’ve been using this for over 10 minutes right now, and this light is ON. These lights are on my slow cooker is ON, the rice is, I’m cooking some rice in it. I have this electric kettle ON.

I think you can see some fumes coming out of, I mean some steam coming out of it, and apart from that my laptop is charging. So, one, two, three four, five, in a non-electrical camping setting, what do we need most, we need light fan maximum in summers, and electrical kettle, and chargers right to charge the devices like cell phone, or maybe a smartwatch, laptop at the moment.

EcoFlow DELTA For Outdoors – You can go with this for maybe seven days, I don’t know. But right now it says, it can still work for 59 minutes, and I’ve been charging this. I’ve been working with this for like 10 minutes already, so it’s really nice. I would say, as for me, it’s really working well, and you should go with it.