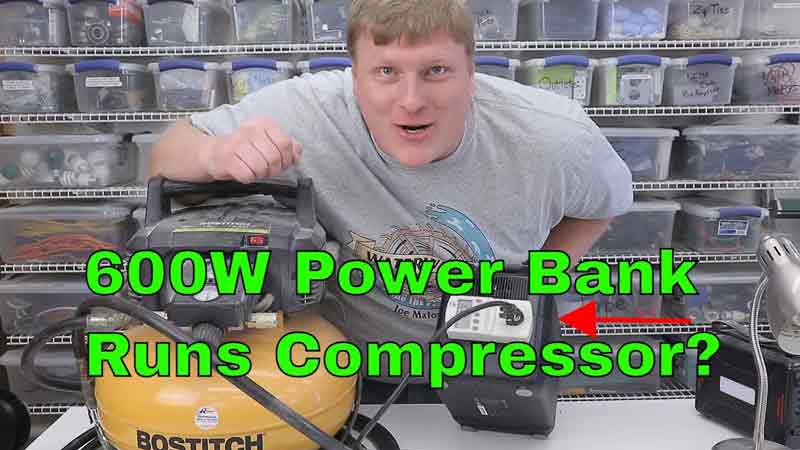 Test EcoFlow RIVER Pro Run Compressor – Today, I’ve got a product review tests demonstration, special for you. It’s a solar generator at least that’s the common industry term for them, really is just a battery bank with an inverter built-in, and some extra like power accessories, and multiple charging sources. Including one of them which can be used for solar.

This is how you charge it. This is a normal C13 plug, I know, I have quite a few of them. So, there’s no external DC power brick that would be massive, and you just plug it in turn on, so you get the display working. Charging on the AC cord, you can see it’s pulling 650 watts. That is that’s faster than you can discard it.

You can actually charge it faster than you can discharge it with the inverter. That’s built-in, I hold this up to the microphone. I have a microphone right there, so that’s the fan that runs whenever it’s plugged in even if it’s full. The fans running, but they have an app that I can change quiet charging. So, instead of 650 watts, it goes down to right around 100 watts, and the fan gets a lot quieter not completely off, but quieter which brings me to another thing. This is EcoFlow River Pro Specififcations.

The app runs on wi-fi, so if you’re connected to your home wi-fi, you have to disconnect from that and connect to this on the wi-fi settings on your phone. I kind of wish it was Bluetooth, but that’s a minor gripe. Everything works just fine, I had no problems connecting or registering the app. it all just works,  except you have to disconnect from your home wi-fi, plugged into AC, this will charge up from zero to eighty percent in an hour.

It’ll charge from zero to a hundred percent in one point six hours. So, that is super fast compared to anything else that I found. I think that’s industry-leading for any solar generator that I can find anywhere. Once you’re connected to it on wi-fi, this is what the app looks like. You have the temperature that’s adjustable between Fahrenheit and Celsius, capacity remaining, charging time, and if you have a load on it, it’ll tell you time to empty.

You can turn the light on and off, of course, there are different modes, slow, high, and save. You can turn the AC on and off from here, turn the DC loads on and off in AC. You have your voltage which is fixed depending on the model that you get 50 hertz, 60 hertz. No, I don’t want to switch that, and x-boost whether you want x-boost on or off, and I’ll get to that in a little bit down to the battery.

You can change it to a maximum charge capacity of like 68, you can do this to increase your battery life span. If you want to keep this for many years and cycle it daily, if you reduce this then it prolongs the life of your solar generator. I’ll just leave that at 100 from now in the system. You also have a system standard LCD standby time quiet charging turn that on, and it’ll go quieter with a few sound effects.

Of course, there’s your temperature DC mode, you can change the charging mode from auto MPPT adapter. I’m not sure exactly how the adapter works other than maybe it’s just a fixed voltage, like from another battery then you can go into your firmware version. And there’s my firmware version, and if you have a load on it.

This will tell you the power output, that is going out of the AC or the DC. One last thing to show is, there’s a breakout port for expanding the capacity with other Ecoflow products. The first one is the river pro extra battery, so you can increase the battery capacity from 720 watt-hours to 1440 watt-hours. They also offer an extra power kit.

The DC barrel jack ports, these ones here are good for three amps. Let’s test that, this is the 12-volt cable that came with it, plug that in there 13.5 volts that brings me to a major selling point of this. It’s a 28.8-volt battery, so this is a regulated DC power supply. You will always have 13.5 volts until it’s dead. Okay,  let’s bring this up to 3 amps, of course, it’s holding that, no problem.

Let’s go further, 4 amps, 5 amps, 6 amps, 7 amps, that’s a lot more than three eight amps is it gonna stop. I’m gonna let it sit here for a little bit, and maybe think about shutting off this load tester, turns on the fan at 40, and it’s maintaining eight amps.

Of course, I’m not done yet, but it works. This is a true test of any inverter anywhere trying to run an air compressor 75 volts, 74, 73. We’re over 80 psi and 73 volts, we’re up to 100 psi. I wonder if 110 psi. Okay, it went up to full pressure as 150 psi, freaking amazing. I don’t know the inverter’s still running on. It’s still 120 volts, so this never actually shut off, and it filled up this air compressor completely.

This is a 2.6 scfm at 90 psi compressor, it’s a 10 and a half amps. Now, let’s dump some air out, and see if it will actually restart the compressor. It did. Wow, that’s amazing, no I’m not going to keep running.  It’s just amazing, that it can do that. It’s just amazing, that was able to do that. Now, I should preface that you should never actually want to continuously do this.

Don’t take this to a job site, and expect it to run off of this continuously. First, it takes a lot longer second at reduced voltages, your motor is spinning a lot slower, and you’re getting a lot less airflow cooling the motor in the compressor or whatever device. If you have some sort of heater, like a heat gun, it may be putting out more power, but the fan is moving slower.

So, you could actually burn it up. That’s one disadvantage of this. Also, if whatever you’re using has a fan to cool it off, and it’s running slower, you risk burning it up, but it’s still amazing. It was able to do that a further demonstration of the capabilities of this little device. They can run a giant saw, not very fast, not with much power, but it can run it without stalling out which is super impressive.

You can watch the video for further demonstrations.

Test EcoFlow RIVER Pro Run Compressor – Overall, I do recommend this device pretty much. Everybody could use this, even if you live in an apartment, and there’s a power outage, what are you to do, you can’t run a generator. It’s an apartment,  you could at least run some lights, you can even make coffee, and if you need help convincing your wife,  you could use this. I’m going to run a hairdryer, and curling iron, and a flattener, and whatever else.