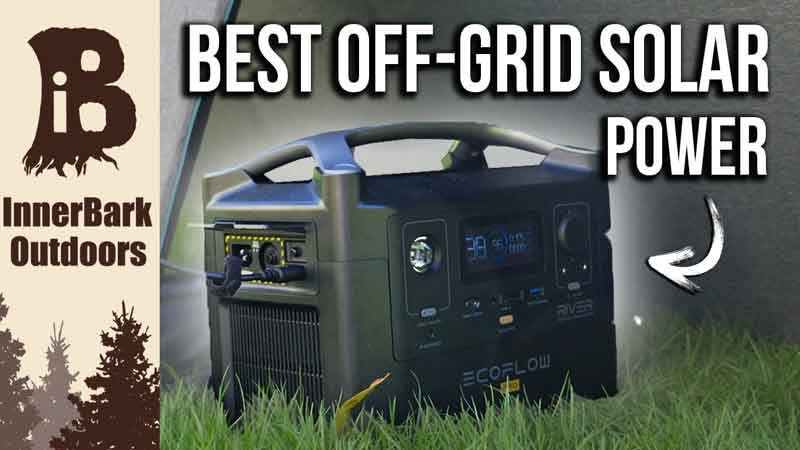 EcoFlow River Pro Test – I wanted to review the Ecoflow River Pro. This is one of their generators that they recently produced, and it builds upon their River line. So, you have different size battery capacities depending on what you need. This is one of the higher capacity ones, I believe, and essentially what it does is, store electricity in the form of a lithium battery.

So, instead of having a large, or noisy combustion engine, you have a really quiet device. So, everything is stored inside here, and this is about as loud as it gets. It just sounds like the cooling fan on a computer, and that’s pretty much as loud as it gets, whether it be charging, or actually putting on a load.

Is this the right thing for you? Go ahead check out the video, see what I’m able to power with this thing,  and figure out if this is something that you can replace your gas generator entirely or a supplement? You don’t have to kick it on all the time.

The Ecoflow River Pro weighs in at about 17 pounds. The body itself is constructed of aluminum and plastic. The LCD display is one of my favorite features, as it shows charge time, remaining battery power draw, and approximate burn time based on the current load.

The unit has multiple options to charge including wall power, solar, and 12 volts from a vehicle. You have multiple power options available to you, but the great thing about this is, that you can turn on power outputs individually. You only turn on what you need the light on the face is adequate for a work light. It has a low, high, and SOS mode. The front of the unit also has multiple USB ports including a USB-C and a fast charge, and if you have 12v devices, this unit has you covered as well.

Everything was well packaged and was really safe during transport, and I just wanted to go over some of the ports and the accessories that come with this thing straight from the factory.

The ports and the accessories

The first one is going to be for a 12-volt socket, that you would find in a standard automobile. And this one goes from that 12-volt socket to this connector here, which is basically what they use for the solar and car connection. It uses the same port.

The next one that they have is the MC4 solar connector. This one goes into the solar panels, and this one has the same connector as this 12 volt one right here, and then they also have the AC cord, and this one is a standard plug that you’d find in a lot of different appliances at home.

If you, for some reason lost this one, it’s pretty easy to go to goodwill, or even on amazon, and be able to order one of these things. And it is a grounded plug as well, and then this little cord right here which is basically a 12 volt male to a 12-volt male little connector, and so there’s a lot of appliances out there or devices that have 12 volts direct in, and allow that to go in there without any weird interfaces in between.

So, let’s go ahead and look at the device itself. The front of the device is going to have most of your ports. Let’s go ahead, and turn this thing ON, and it has a really nice color LCD display, and so right now it’s showing us that currently, we have 29 power, and that’s what it ships with. I haven’t plugged it in at all to any solar panels, or AC outlets, and as is it has 99 hours right over here.

We have the button for light, and what I liked about this, is that it goes into like this low mode, and then you have a high mode, and you can already see that based on. If we use this continuously, we would have 59 hours of it, and this is pretty bright. You could easily look and read, and do all that stuff with it, and then you also have after here and SOS, power mode, and so this can be left ON for quite a long time 88 hours based on 30, pretty cool.

Just below that, you have wi-fi, reset button, and then just underneath the screen, on the left side, we have a USB-C 100 watt. If you have something an Apple laptop, or something like that, you could charge directly off that, has USB-a, and also has a USB fast-charge here, just below that is, that button to turn the whole thing ON, and then right over here, is where we have a standard 12-volt car socket.

It might be on the other way, and you can plug in your regular car-powered accessories through here, or through these bottom ports right here. You also have these little tiny ports for this cable, pretty simple stuff. If you go onto this side of the unit, the only thing we have here, I shouldn’t say the only thing, but the main thing we have here is, the AC outlets.

So, we have three of them right here, and they have a little cut-out hole for the grounding plug, and if you choose, you can also choose to get the expandable power pack, and that is plugged in through here. There are two larger connections right here for I’m assuming the positive and negative. There are also some communication pins as well so that the battery management can communicate, and then, on this side is, where all the charging happens.

So, lift up this flap, you have this little connector right here which is for the AC power cord, it’s very uniquely shaped. So, it’s easy to remember, and then you have the fuse reset, so if this thing gets overloaded during charging, it’ll trip, and all you’ve got to do is press that, and I’m assuming, there’s probably a little tube fuse somewhere in there as well.

And then right over here, is where you would plug in the MC4 connector, or the 12 volt DC connector,  and then for more permanent installation, you also have a grounding screw right here. So, you just connect your ground wire to that and then connect it to whatever ground you’re using, and that’s pretty much it.

The backside is sleek, overall, I think the design and construction of the actual body are really good. It’s a mixture of metal, and also some plastic. I’m not seeing any weird gapings, and it doesn’t feel cheap and hollow. It all seems to be working pretty well.

EcoFlow River Pro Test – So, let’s go ahead and get into the rest of the review. Now, that we’ve plugged it into the wall power. it has kicked, itself ON, and the internal cooling fan has also kicked ON. And so now, we have this little dial here, that lets us know the recharge time. Obviously, our fuel gauge here, and then looks like how many watts are getting put into this unit.

So, it’s really nice to have this sort of countdown, that way we’re not guessing, how much until we’re ready to go. Their 160-watt panels have MC4 connectors which are industry-standard, waterproof, and case. It itself actually acts as the stand, so it’s all compact. You don’t have to have anything extra unless you want to have a more permanent solution.

Right now, we’re in full sunlight, the time on the clock is 4.30 in the afternoon, and we have just a little bit of haze in the atmosphere, not a lot, but this thing is pumping out 108 watts with the 160-watt panel. I got curious and wanted to see what the Ecoflow river pro could charge and run.

So, just starting it ON, it’s going to be pulling about 65 watts, or so one of the best ways to destroy efficiency is to cause heat, and this tool’s job is to create heat.

All right, so we pulled the refrigerator away from the wall, so we could actually get to the plug, and good thing, we did anyway, because we needed to vacuum behind it. So, just gonna go ahead, reach back here to unplug this sucker, plugged in.

Let’s see, so this is where we’re at when it’s at complete idle, and again, I’m just going to wait to see when the compressor is going to kick on. So I turned OFF energy saver mode on the refrigerator, and then I turned ON power chill, and then I also opened up the refrigerator door per the wife’s recommendations,  and so the highest output.

Let’s see, what we are at, we’re looking at about four, three, to four hours for burn time at an 85 capacity Ecoflow, not bad, and keep in mind, that it is still charging this thing. So, when we started, we were at 85 percent, now we’re 87.

That is my review of the EcoFlow River Pro. This thing is pretty dialed in for small applications where you’re running like small electronics, TVs, things like that. I think, if you’re going to be running something like a fridge on it full time, then you definitely should go for their Delta which can take more solar energy in, and also store more of that energy throughout the day.

EcoFlow River Pro Test – So, they can use it 24/7. But, as is I think, this is a really good buy. A couple of things that I would change on this would be the cover port for all the charging. So, right now, as it is you have this plastic flap, and once you have it open it, kind of just flaps in the wind like this. It would be really nice if it had like a little slot, or something like that, where this can actually go like that, and then like push into the body, so it’s not going to get hit by something.