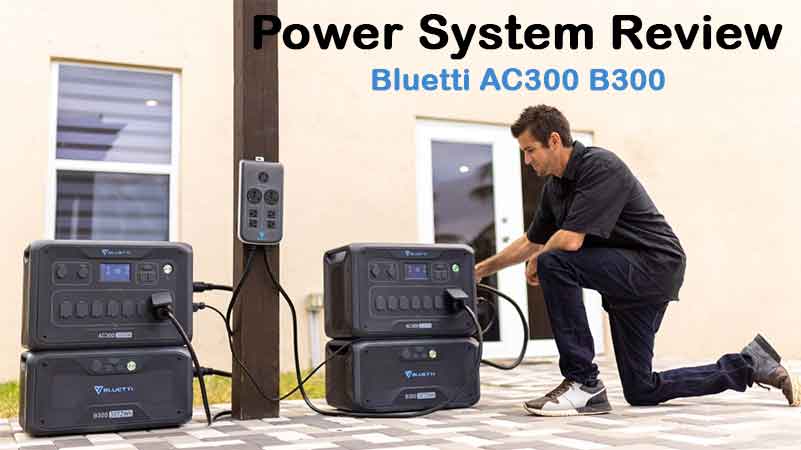 Power System Review – Bluetti AC300 B300 – I like fixing things anything to do with solar batteries or really anything else that’s interesting. In today’s article, I’m going to be talking about a battery system that I’ve been using for the past month and a half.

These three giant boxes showed up, and inside were the AC300 and two B300 batteries. These units are a decent size, but I don’t think I’ve ever seen thicker styrofoam in a package. So, if you get one at least, you know it’ll get to your door unscathed. So, this is a battery system, and maybe you’re curious about batteries for your RV, home backup off-grid, or to use as a buffer for electricity prices for example.

I’m in Pennsylvania, and I just heard that next month our electric rates are going up by 44. It won’t affect us very much because we have all those solar panels but that’s a big increase. I’ll tell you what I really think, share some test results, and also show you some real-life scenarios where you can use these.

So, what’s interesting about a setup like this is that the main unit has no battery in it, and this can be very confusing. Because the batteries are down it. I have them stacked on top of each other, and they are connected to the main unit through big cables, so this thing manages everything. And you can have up to four separate batteries connected, and if you happen to have all four, you’d be talking 12.28 kilowatt-hours of storage which is very similar to what a power wall might be at and a half kilowatt-hours.

A benefit of a setup like this is that you can move it around if you want. Each battery does weigh about 80 pounds, and this guy up here weighs about half that. So, the AC300 manages the AC inverter, DC outputs as well as other battery management functions. I actually want to take a peek inside. So, I’ll open up. I’ll show you what’s inside of here, but before I do that, let’s look at the outside.

It’s got six regular AC outlets as well as an RV plug, and by the way, I’m not a big fan of these dust covers. It’s got USB-a ports and a USB-c port at the top, this is power delivery. You can run your laptop off of this, we have a 24 volts 10 amps port, and you would think that this is a 12 volts port, but it’s not and has a big warning on here, 24 volts dc output only.

I’ll show you what you can run, and why this is here, and then, you have a 12 volts 30 amps plug. You have to get an adapter. It doesn’t come with that. It has a nice touch screen in the middle which shows you all kinds of information and some settings that you can change.

Now, one downside to this screen that I found is that the viewing angle isn’t so great. So, if you’re looking at some angle direction, it’s hard to see, but when you’re looking straight on, you can see it with no problem. And on the top, you have two wireless charging pads, on the side here’s where the batteries connect in, and the AC input and DC input. And it does come with the cables for both of these.

The B300s are batteries that are rated for 3,072 watt-hours. The chemistry inside here is lithium iron phosphate, and they are rated for 3,500 cycles. The B300 has its own DC outputs: 12 volts car port, USB-c, and USB-a ports. I’ll show you how you can use them, and when I get to the real-life scenarios. And it’s also got a simple state of charge indicator on the side. You have some DC input, so you can actually charge this battery all by itself, and it comes with this cable with MC4 connectors on the end. You can charge it with a wall AC power adapter from Bluetti which is a separate purchase.

Charging up the B300 batteries

Now, let’s talk about charging up the batteries. This system can handle some large power inputs. You can do up to 2,400 watts of solar, and 3,000 watts of AC input at the same time for a total of 5,400 watts. Now many wall outlets are only on a 15 amps breaker, so you’d have to modify things at your house to output 25 amps if you wanted to reach that 3,000 watts ac input limit.

For DC charging, it comes with one cable with two sets of MC4 connectors on the end. So, you can have two independent sources say solar or the 12 volts port in your car. But here, I have both hooked up to solar to see how much I can get, and with both sets connected to the six panels I have. I’m seeing a consistent wattage over 2,200 watts, so very close to that max of 2,400. If I add the AC input at the same time, drawing 15 amps at 120 volts. I’m getting a combined charging total of about 4,000 watts. And one feature I like with AC charging is that you can select between 1 and 30 amps of input current.

Now, for the output, the AC300 has some great numbers with an inverter that can output 3,000 watts continuous and a 6,000 watts surge. I have it connected to an RV through the 30 amps port, and I turned on the air conditioning inside as well as all the lights, and I had no problem running that. And so I added another load of 1,200 watts, and that put it over 3,000 watts of AC output. I ran it for more than five minutes, and again, I had no problems.

At the beginning Power System Review, I mentioned this strange 24 volts port that looks like. It should be a 12 volts port which is why they had to put a warning there. Now, one reason to increase the voltage is to get you more power without increasing the amp,s and there are a few things that I can think of that, work great here, a portable refrigerator is one of them. And these can typically run between 12 and 24 volts. Another use case is charging a smaller more portable power station since their input can likely handle that voltage.

Now, if you’re looking for a standard 12 volts port, you’ll find it on the B300. It has those separate DC input and output ports. So, you can use it as a standalone device. So here, for example, I have the B300 being charged by a solar panel and running a portable refrigerator at the same time. And if you’re with the B300 by itself, and you need a little bit of AC, you can use a small inverter like this.

One another test case that I did was to pretend there was a power outage. And with one B300 connected I put it in my kitchen and plugged in my fridge, and my chest freezer downstairs, in addition, we made a couple of cups of coffee and cooked with our pressure cooker, and the battery kept the food cold for about 13 hours before it ran out. So, if I connected another battery, I could expect to double that. So, one of the things I noticed about the AC300 is how quiet it is.

You can watch the video for the battery inside information.

View more detail about these Power System Review AC300 and B300