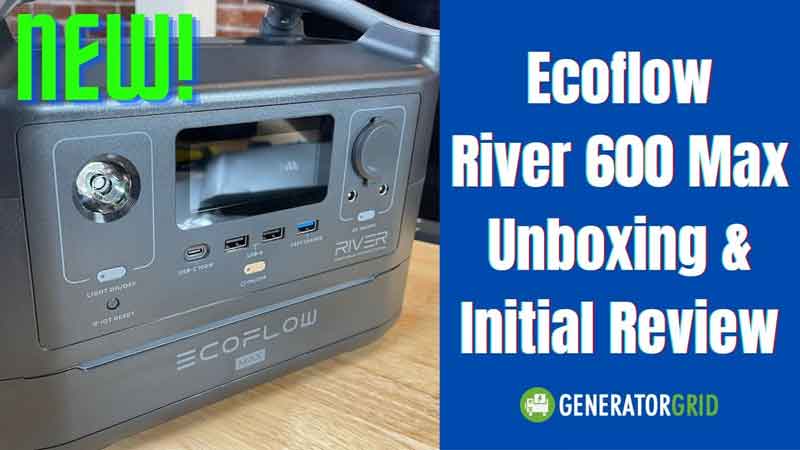 River 600 Max vs Jackery 500 – This is going to be an unboxing article of the new River 600 max. The max is actually just an extra battery pack on the River 600. Let’s go ahead, and get this opened up, and we’ll compare it to some of its direct competitors, and I just kind of want to get my initial impressions.

I’m probably pretty familiar with some of the other battery packs that are about 300 watt-hour size. So,  okay, nice looking white box. Now, this is kind of an iteration of the R600 which was EcoFlow released on Kickstarter, and see we’ve got some internals here, just a kind of guide to the app which I’ll have to check out.

I haven’t used the app yet, I think it’ll actually work for the Ecoflow 1300 as well. Quick start guide goes ahead and leave that out. All right, get rid of the box here, let’s take a look at this thing, I am excited to play around with this because this is cool. It’s got a general on-off button here. It’s got a similar display is the Ecoflow Delta, but the cool thing about the River is, you get some of the advantages of the Delta, like really fast charging.

But in you know, significantly smaller size. This is a 288 watt-hour battery, and the cool thing about it is you can add an additional battery pack underneath here. And turn this into the river 600 backs which is what is inside this other box here, that will open up in just a second. I just kind of want to take a look at this real quick.

It’s got two USB-A then a more powerful USB-A, there I’ve got 100-watt USB-C 100 wide is nice, just as I can compare the Jackery. The new Jackery 300, just has a 60 watt. So if you have a more powerful MacBook 100 watts out there, that’s nice. Let’s just do a little comparison while we’re here.

RIVER 600 And Extra Battery Bundle
Price: $599.00
RIVER 600 + EXTRA BATTERY = RIVER 600 MAX After integrating the Extra Battery to RIVER 600, you will get the RIVER 600 Bundle which is monitored and managed as a whole by the BMS of the main model.
Buy Product
View On Store

Let’s just get right to it, I’ve got a hot pot here, and here’s our incoming power on this is, that light, that’s new okay, lashes all right cool, DC import. All right, let’s just give this a shot, we can hear the fans kicking on. You know, right next to the fans here, 65 decibels, my normal range in here is about 55. It’s got some fans kicking on, but let’s just do the test here, right overload all right.

So, cannot handle the surge of this little hot pot, good to know. I think this hot pot probably surges maybe like 1500. Let’s try it one more time, no, okay so, we get a nice little overload wear. It doesn’t handle the hot pot test, that is fine. It’s a little I was kind of hoping it would, but not a problem, let’s give it one more little test here.

This is a 500-watt heater. See how it does with this 150 watts, probably, 597 – 599, okay so this is rather than a 500-watt heater. No problem, just a nice little test. Now, I shouldn’t be able to actually sustain this, because it can do 600 watts sustained in 1200 watt surge. So, great! I mean just as like a comparison fans have kicked up, here we got this going to almost 72 decibels.  So, not the quietest thing in the world, but very impressive for not a huge size.

Another kind of comparison that might be good for the River is the Anker powerhouse 400. So, this can do. What do we get here is a 300-watt output. So, it probably has a surge. This is probably not going to be able to handle this either, but I really like this. Little Anker one. It tried and then just petered right out.

I mean of these three, you know, the only one able to actually power 500 watts is the new River 600. So,  definitely impressive in terms of just sheer output power. It is a little bit bulkier but you’re getting 288 watt-hours versus this Jackery is 293. A little more, if you just need the watt-hours at kind of a lower wattage like for maybe like a CPAP or something, I might go with the Jackery 300, or the powerhouse 400.

But if you need any more power, or if you need more power, and you need some more capacity, then this is kind of interesting. Let’s take a look at turning the river 600 into the river 600 max, that’s what’s an inside box here, really get these tight in there. All right, this is the River extra battery which called the Ecoflow max.

I can take this and essentially, double the capacity, so, we’ll take this from 288 watt-hours to another 288 which I can do math is a 576. I had to cheat, I have a little cheat sheet. So, 576 watt-hours. Let’s open this up, and that’s something that’s kind of interesting about this is, what’s that noise, just this side. It kind of has a little latch on it, close all the way, and with the ability to add kind of external battery packs to this, and then there’s a river 600 pro, that’s coming out.

I’ve tested charging with the Ecoflow Delta, I can take in a thousand watts sometimes. This can only take in 250, but that’s still more than you’re gonna get from that the 160 of the Jackery. So, still gonna have a nice pretty quick charge to it, which I’ll look forward to testing.  But I’m not too concerned about that.

I’ll download the app and play around with that, the 100-watt output is really nice like I said, versus just like the 60 watts on the Jackery 300. I like this handle a lot actually, it reminds me a lot of the Jackery top handle, and I like it more than the two handles set up on the delta.

So cool, River 600 unboxing and just kind of initial review comparing it to the Jackery 300, Anker powerhouse 400, and the Jackery 500.