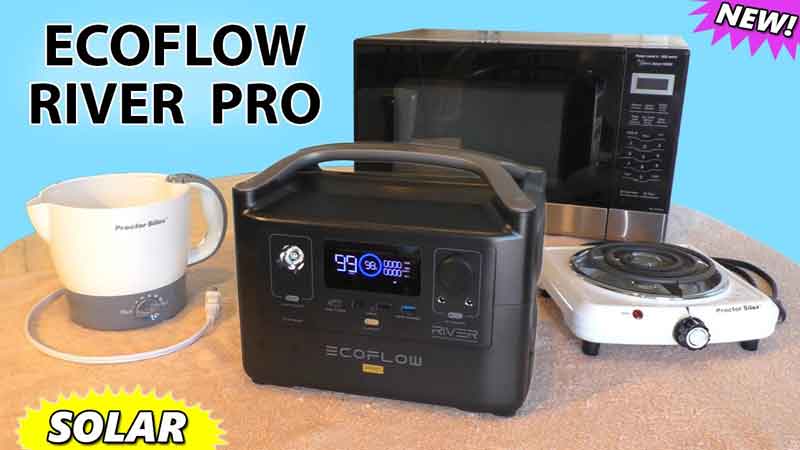 This is two eggs with a slice of turkey, and some pepperoni and this is a stovetop burner, plug it into the battery unit, turn on the AC. It’s using 600 watts. There’s a fan pulling in the air on this side, and it’s blowing air out on this side. Okay, it’s been five minutes. I’ll turn it off, it went from a 100 to 93.

So, I’m making some instant coffee, and I’m gonna wanna know how long it takes. It’s using about 596 watts. Okay, it’s been four minutes, it’s come to a rolling boil, and it has gone from 93 to 89. This is ground turkey, and carrots gonna heat it up in a microwave, got the microwave plugged into the battery unit set.

It’ll do a consistently low draw of electricity for an older style microwave, when you set a lower power level, it’ll just cycle the magnetron on and off. So, it’ll use the full power which is usually like 1400 watts that’s why this has to be a Panasonic inverter on power level 3.

Now, I’m going to test how long it will run my refrigerator. I’m going to time it, so the refrigerator just kicked on, I can hear the compressor running. The battery unit is showing 170 watts output, okay, I’m about two hours, in the battery has gone from 100 to 87. Something that’s kind of cool is Ecoflow has an app that you can connect your phone to the unit, and it shows you real-time stats.

So, it’s showing that it’s an output of 148 watts, you can do cool stuff like turn the light on and off, you can turn the beep off and on, and it allows you to upgrade the firmware. And installing the app was really easy, it took me about five minutes. It comes with this instruction sheet, and what’s really cool is, I can be all the way on the other side of the house, and I can check the status, and watch what’s going on,  and when the unit has a fairly low draw of electricity right now.

It’s 150 watts, it runs completely silent, the fan isn’t blowing right now, and after about 10 minutes of the refrigerator compressor running at 150 watts. The fan has come on, but it’s blowing really softly. So, it has multiple levels of speed depending on how much electricity is being drawn. Okay, it’s been a total of four hours. It’s gone from 100 to 65 percent. So, I would guesstimate, I could run my refrigerator for about 10 or 12 hours total.

I also bought this Ecoflow solar panel. So, let’s hook it up, and charge it in the sunshine, and it plugs in right here on the side. It’s at 61 showing a charge rate of 130 watts, and this is what makes that app so cool. I can be sitting here in my office as it’s charging, so it’s showing its 71 input rate of 110 watts, all from the comfort of my chair, and today is a partly cloudy day, so the input has been going up and down.

Right now, it’s about 80 watts with that cloud cover, it’s three and a half hours later, and the sun is starting to set behind my roof, and it has gone from 61 to 100 in 3 hours and 30 minutes on a partly cloudy day.

Now, I’ll test out the USB charging. These two are fast charging, rapidly fast charging showing an output of 21 watts, and here at the bottom, it shows what’s plugged in. So, it’s got two USB ports.

This is the Ecoflow River Pro, it’s small and compact, and weighs 16 pounds. Out of the box, the battery is at 30 percent. So, I’ll start by doing a charge off my home power, I use the included power cord to plug it into my kilowatt meter. It shows a charging input of 300 watts, and on here showing 3400 watts. It must have some really high-quality fast charging, 25 minutes later now it’s 64 percent.

EcoFlow RIVER PRO DEMO – Over here is a light, it’s got three settings, and also you can turn it on, and long press and it turns off. It’s got one USB-C, two regular USB, and one USB fast charging. It’s got a DC power, the thing you turn it on right there, and then it shows up on the menu. It’s got the 12-volt socket, it also has two jacks and an included cable on this side.

You have your inverter and three outlets, and there’s also an expansion port where you can connect an external battery around the back is bare. On this side is your little power input the housing is thick heavy-duty construction, seems very well made. One thing I like is right here on the handle is the logo kind of etched.

This is good to provide power during a storm power outage, and also for camping. It had also been good to power all the appliances and electronics in a stealth conversion van. Ecoflow also sells a bigger model called the delta and I might actually buy one of these too.