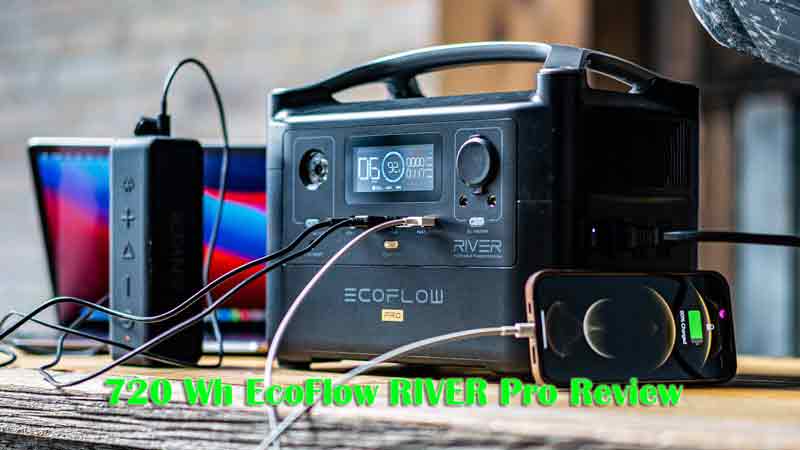 720 Wh EcoFlow RIVER Pro Review – Today, we’ve got this guy right here, something a little bit different, but I’m really having a lot of fun with them. So, this is the Ecoflow River pro generator, and it’s an electric generator. There’s no gas or anything needed, and essentially, it’s just a big battery, it’s really portable.

This is not the apocalypse battery that I think. I thought it was that being said, it is a really dope portable adventure battery. As I’m going to call it, so, I’m going to get it right out of the way. This is not a replacement for a proper big fuel generator or something like that, but this is a really awesome battery. If you’re someone who’s outdoors a lot, who travels a bunch, who needs electronics, I’m that person for sure, let’s talk a little bit about this thing.  How it’s laid out the different ports, and then I’ll talk about my experiences with it.

So, this thing has a rating of 720 watt-hours, or there is an additional battery where you can double that.  You’ll be at 1440. If you look at these batteries, you’ll see some cheaper models, but if you start looking at that watt-hour number, you’ll notice this one is significantly higher.

Essentially, that’s just meaning that it has more juice overall, but the big thing is how quick it recharges as well. So, once this thing is fully depleted, it’ll actually get up to 80 percent charge in less than an hour,  and I think the full charge is like an hour and a half or something. Crazy like that, like it’s pretty nuts, and then as far as outputs up on front here, you’ve got a really nice LCD display.

It’s telling you how many hours are left, so you can see, we’ve got 99 hours left. It’s got a 95 charge and then it’ll tell you if you’re on your input or your output. How many watts you’re actually using. It’s nice to be able to see a visual representation of this thing’s pulling 600 watts, or this flashlight’s pulling one watt. That’s really nice to be able to see, and kind of gauge how long things are going to take or whatever.

How long it’ll charge for, but up here on the front, we’ve got one USB-C that’s capable of 100 watts. We’ve got two USB-A’s and then we’ve got a fast-charge USB. Then we’ve got a DC power, and a light. That light has a low brightness, a high brightness, and then like an SOS, kind of strobing mode. And then on this side, we have three AC inputs.

You can use what’s called their x0boost mode is turned on with their app. Basically, it allows you to run things over like 600 watts. I think up to like 1800 watts you can run with this thing. So, if you need to power something huge like stuff, basically, from my understanding those are meant for things with burners. So, as I said, stuff like a hairdryer, coffee machine, heater, those kinds of things are what that x-boost is made for.

Obviously, it’s going to draw heavily on battery life, but you can run them, and then over here, are the inputs. So, you’ve got your normal input here to actually charge the battery, and then you’ve actually got a solar panel input as well.

Now, you can run, I think it’s 110-watt solar panels, and I believe, you can link four of those together to actually charge this thing. Now, Ecoflow has its own line of solar panels, but I believe you can use any other ones as long as they fall within the specs that are needed for this guy.

This thing does have an app you can download. Basically, just allows you to control this thing from the app monitor usages, you can monitor different ones at the same time, but you don’t need the app to run it which is really nice, because honestly, I probably wouldn’t use the app most times while using this.

And then, we just have fans on both sides to obviously help with cooling and keep this thing as efficient as possible. You do have a battery expansion port here as well like I said if you want to take that up to 1440 watt-hours. This thing is made out of a pretty durable feeling plastic, it feels good.

You can watch full details in the video below 🙂

So, I think this will be perfect for someone who needs to charge their little mini-fridge, someone needs to keep their computers going editing on the road, that if their van breaks down. They’ve got backup options like this, which is meant for those people, that’s why I’m calling it an adventure battery. So, while this may not be the end of the world apocalypse battery, that I originally thought, it did definitely excel in that adventure battery category.