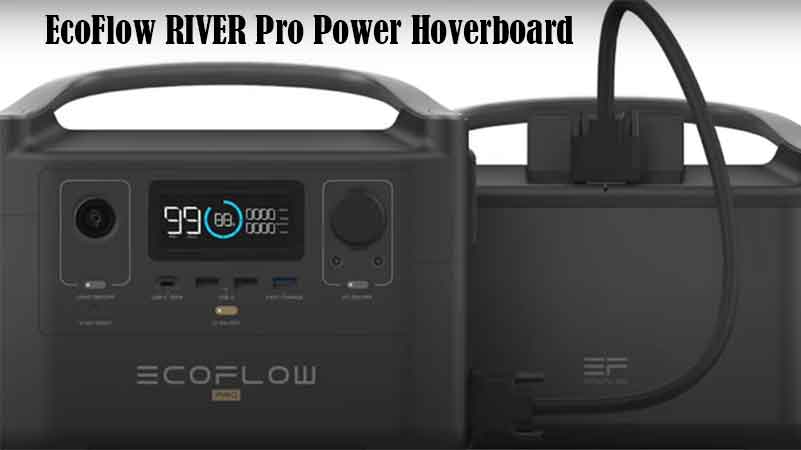 EcoFlow RIVER Pro Power Hoverboard – Do you guys ever go camping and wish you could have a way to bring your Onewheel or hoverboard? Well, we brought the Onewheel, you ever wish you had a way to charge it. Well, as you can see, it’s charging in.

Today, we’re going to talk about a way that we found to charge our electronic devices while we’re out camping. So, we’re just going to hunker down in our tent, this little box right here, weighing less than I think, it’s 16 pounds is powering everything. That’s going on in here, from the movie that my daughter’s watching all the way, to this Onewheel.

Let me tell you about how I’m charging my Onewheel in this tent. This is called the Ecoflow River Pro, and see if this is something that can work with personal electric vehicles like the Onewheel. This little portable power station has some pretty amazing features from its 720 watt-hour capacity, its ability to recharge from zero to eighty percent in under an hour, which is insane for batteries like this.

It has three AC outlets on the side, it’s got plenty of USB outlets for you to charge your phones which I’m charging right now portable Bluetooth speaker. You can charge your laptops, so you can plug in the USB-c, and now go into your computer directly into that USB-c, I get fast charging. So, I can keep blogging, keep editing videos for the youtube channel. It’s pretty amazing.

Ecoflow has a 160 watts solar panel that I can use to charge this bad boy in full sunlight. You should be able to charge from zero to full in four hours, that’s also pretty amazing. Unfortunately, right now it’s a little overcast raining, a little bit of thunder, and so we’ll wait for that to clear up, and then we’ll show you how that feature works.

How does it work?

You’re probably wondering how many times this battery can charge a Onewheel? The Onewheel has a 324 watt-hour capacity, so technically, you should be able to get two full charges out of it.

You’re actually converting energy twice. So, you’re gonna lose a bit of power there in those two conversions. So, I’d probably say, a battery like that, is going to charge the board overall, probably about twice. In the best-case scenario, you can get two full charges out of this battery onto your Onewheel XR, but obviously, if you’re watching TV, if you’re charging other devices that are not going to be the case.

The nice thing about this though is, it is expandable, you can buy separate battery packs. So, that you can double the amount of capacity. You’re able to charge this so quickly, eighty zero to eighty percent in less than an hour. You can charge this battery pack, you can also buy the solar panels which you can fully charge in four hours. You’re able to get a zero to full charge.

And then, I’ve got the Onewheel plugged into this, taking off about 190 watts of power. Some of the benefits of this Ecoflow, some say like the gas generator. The gas generator is big, it’s bulky, but with this,  there are no fumes, there’s this quiet fan that you can kind of hear. I don’t know if you can hear that. Let me just show you around here, we have a 78 charge that’s what this tells us right now, it’s taking in zero watts, that’s because I don’t have it plugged in and charging.

Because I don’t have it attached to the solar panels right now. This bottom number here is, the number of watts that are actually being used at this moment, 258, that’s the one wheel drawing it. That’s the TV, that’s some of these other devices, my phone, Bluetooth speaker, and at this rate it calculates. I have about two hours of charge time. Now, if I were to take off some of these devices here, we have our three AC outlets.

I’m gonna unplug, I think this is the one, hopefully, it’s not the good tv, still going I unplugged the one. You can see, the watts that are being drawn has dropped significantly, down to about 45. The Onewheel itself is no longer charging, and now at this rate, if I was just plugging my phone, Bluetooth speaker, and TV, I could run for about 10 – 11 hours.

A couple of things it does come with a light, so if you are taking camping, or using it in emergency situations, you have this light here. Over on this side, so if you open this, you can see how we charge this unit itself, a wall outlet, a solar panel. I love that, it charges crazy fast, zero to eighty percent in an hour.  That’s unheard of the unit itself, is very solid feels, very rugged, very durable.

It doesn’t feel cheap in any way. I love that at the same time, it’s portable, it’s under 16 pounds. It has every charging port that I’ll ever need. It offers me power on the go, to charge my devices, but the TV, the Onewheel has the option for an expandable battery pack, and I can charge it using solar power. The app itself is actually very helpful. Remotely, you can check on the device to see how it’s doing by using something called x-boost.

Something within this device, you’re able to boost up the number of watts. You can draw OFF of it, meaning, normally you can only draw 600 watts off of this, but if you wanted, you can go up to 1800 watts. Only works that way on certain devices, kind of kitchen essential devices, like a hot pan, like an electric stove, a hairdryer, a water heater, those kinds of things.

EcoFlow RIVER 600 Pro
Price: $649.00
3 x 600W AC OUTLETS AND 720Wh CAPACITY The RIVER Pro can power up to 10 devices simultaneously with multiple outlet options, including 3 pure sine wave AC outlets. It offers up to 720Wh power and it weighs just 15.9lbs, which makes it a portable power source for adventure on the go.
View More Details
View On Store

EcoFlow RIVER Pro Power Hoverboard – Pretty amazing that you can boost it up from 600 to 1800 watts availability. The display is very informative, and so those are the things that I like about it, the things that I feel could be improved.  The screen like you saw, it has a glare. So, sometimes it’s hard to read, and then in bright direct light, it’s you can’t see what’s going on other than that. I don’t really have any other complaints.

I would recommend this for anyone that’s on the go, loves adventure, if you need portable juice for your adventure needs, then the EcoFlow River Pro is the charging device for you. There’s something invigorating about going camping, getting away from the hustle and bustle of life, the texts, the messages the calls, wait what’s that if you guys have a part portable power solution.