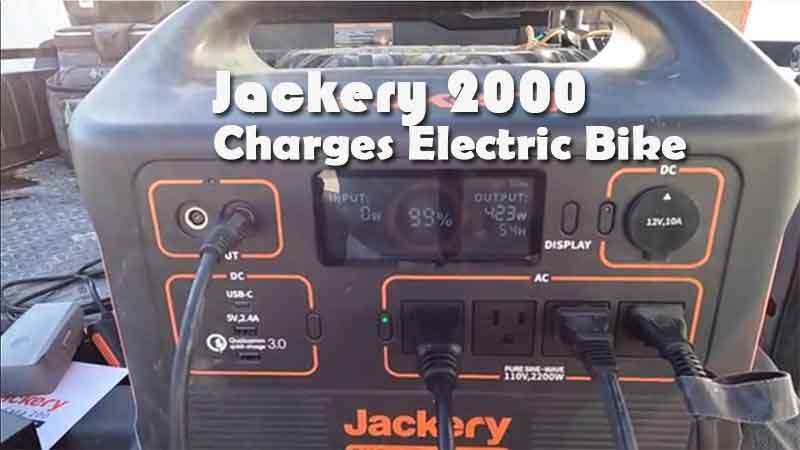 Jackery 2000 Charges Electric Bike – I need to go get my Jackery battery. We’re going to set that thing up and use it this weekend. There’s my coffee pot, I got an electric skillet. I’ve been working this battery hard. I’ve been running my computers off of it that monitor. This is the Jackery 2000. It’s their newest model.

This thing is a beast. I’ve had it for a few weeks. I’ve been testing the heck out of it. But, I’ll tell you what hasn’t disappointed me. This thing has been running everything. It’s an add-on to the battery of the van. I have a solar system on the van, but to add this kind of firepower, look at that it’s making a cup of coffee right now not even touching the van solar. It’s perfect. They also the solar saga 200.

They have 200 watts portable panels now, 19 volts, it’s a beast. Look at a nice case they come in, they’re all zippered. They’ve really improved the quality of the solar panels. So, let’s stretch one out, and I’ll show you what it looks like. They’re long but all in one, that’s 200 watts right there. My van has 400 watts total. So, these two panels right here would equal the van goodness man has. This stuff improved.

Here’s a little closer, look at the battery. It’s dusty, I’ve been using this thing for a few weeks. As I said, it’s got AC/DC. There’s a display all digital in it. That’s the inputs from the solar panels, and you got 12 volts to plug over there. They also include all the adapters and everything. The splitter, you can actually hook four solar panels on this thing. So, realistically, you could put 800 watts into this thing.

You could power a house, but you know what look at that 12 months extra warranty. If you want it, these guys have been around a while, and it comes with the user guide, very simple to set up. These specs show you the voltage and the circuitry, you know operating temperatures that kind of thing.

I run an electric skillet, my coffee pot, and computers, just guess what I even brought the electric bike with me. Let’s see if it’ll charge it up. Anyway, I’ve got the charger hooked on it, and it is charging it up straight off the Jackery. So, that charger’s pulling about 80 watts for the bike. I got a drone battery hooked up. Those are about 60 watts. They pull around 60 the charger. So, I can charge the bike, the drones, camera battery. There we got what 111 – 112 with drone battery and bike.

There it is, I mean it’s a powerhouse. I can throw this thing in the buggy and be totally powered. So, if you’re out camping, in emergencies, if you need emergency power, a Jackery 2000 you could run a refrigerator for a while. There’s quite a bit, you could do with this thing.

Really something to see these batteries evolve in size and power. I mean this short period of time. I think these guys are even going to be at the book. Here in quartzite have a booth for kicks. Let’s throw an electric heater on it, see what it’s going to do, and crank that thing up. It’s blowing, it’s starting to heat 320. It climbs, should start climbing, love it. You could actually run a little heat off of it for a while.  Also, I just got a Starlink system. It powers it up, that’s running off the Jackery. There will be more on that on Starlink.

So, pretty cool, and guess what, I’m going to set this up, I’m going to live stream a Christmas parade tonight, right here in Quartzite. So, I’m going to be using the Jackery. Power of the cameras, power thing up, maybe I would take the heater. Here you go, it’s working, got the buggy all set up. You can see it got a light up.