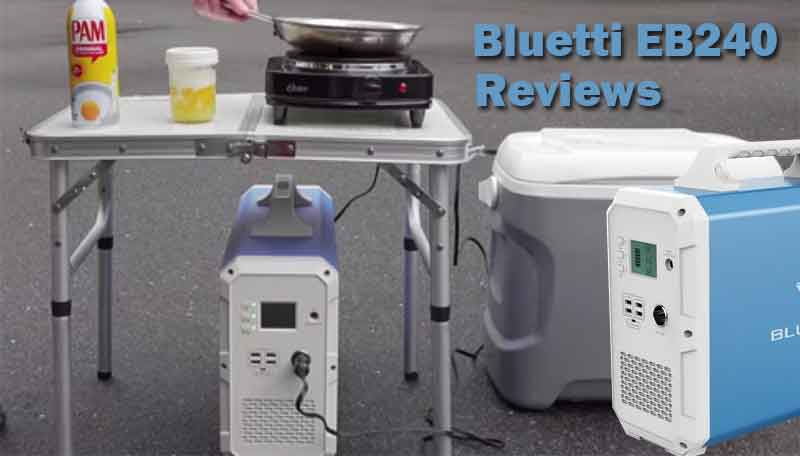 Maxoak Bluetti Eb240 Review – If you’re looking for the biggest amount of power that you can take with you, this is the article for you because I’m gonna be showing you a unit that is absolutely massive. It can run all sorts of things you would never believe that a battery-powered generator could, and I put it through its paces, give you the specs, but I show you some real-world uses that you can see for yourself, and decide if this might be something for you.

The product we’re gonna look at is the Bluetti EB240 made by MakOak, and this thing is rated for 2400 watt-hours in 1,000 watts, but wait for a second, because they just said watts, and then I said watt-hours. So, what is the difference between these things, and why do you even care? Well, you care because it’s your money and if you understand what this thing puts out.  You’ll know if it’ll work for you or not before you buy it, and let’s start with watts.

Now, watts are really important because that is the maximum amount of power. You can run at any given time. So, that could either be a hairdryer that’s 1000 watts, or 10 computers that are 100 watts each, and it’s kind of like the speed in your car. It’s the maximum speed that the car can go, but that doesn’t tell you how far you can go, and that’s where we get into watt-hours.

Now, you want to think of watt-hours like the size of the gas tank in your car. If the tank was bigger, you could drive for longer, and that’s exactly what watt-hours mean. It means that you can technically run 2400 watts for one hour. Now, that doesn’t sound like a lot of power, but this is one of the second largest on the market now from Bluetti before EP500.

Bluetti EB240 2400Wh/1000W
Price: (Discount Available)
Big enough to power your home circuits, yet portable enough to take with you on the go. The Bluetti EB240 is a necessity when you have to confront serious energy shortage circumstances.
Buy Product
View On Store

For the rest of this review, I’m going to show you real-world examples of what you can actually do. Now, even though you’re carrying a huge amount of power around. It’s pretty light at 48 pounds, and you can do it with one hand using this rubberized handle, and all of that power is generated using pure sign technology for the cleanest kind of power.

You can get and with 2400 watt-hours. You’ll be running for a very long time before we do anything. We’ve got to get the unit charged up now inside our lithium-ion batteries, and get them charged. You can use the included charger and plug it right in the front, and it takes about 15 hours to charge completely.  The display in the front shows you the input wattage, and it also shows you how far along with the charges.

Here’s an even better option, you can go completely solar, and never plug in at all. This thing can connect to all different kinds of solar panels, large and small, and this lets you go completely wireless. You can go off-grid, and this has a built-in MPPT controller. So, it’s totally self-contained. Now, depending on what kind of solar panel you use is gonna determine how fast you can charge the unit up.

Now, I know that specs matter, and that’s why I included them. But what I want to know is what can I actually do with this thing. First, let’s turn the unit ON, you do that by holding the power button until the front display turns ON. You can also independently control the AC and the DC plugs. Now, this is really handy, if you’re gonna use it for a built-in installation like a tiny house, or a camper, this works out really well for USB ports, and they’re all high amperage ports but this is the one that really made a difference for me.

It’s a USB-C port that means you can plug it right into a laptop, and charge it directly without an AC adapter. Your other ports in the front include the input port for charging, and you’ve also got this DC port which is the standard cigarette lighter, and you can use this to power things. Only you can not charge the unit using that plug on the back.

We’ve got the exhaust for the cooling fans. Now, this fan only operates when needed, so that makes it a lot quieter. And in addition, you’ve got two outlets on the back that you can use for up to 1000 watts. Now, I would’ve liked to have seen more outlets, but these do the job, and you could plug a strip in from more outlets.

Maxoak Bluetti Eb240 Review – If you need them, now even though this thing is big, I wanted to start off small just to make sure it actually worked, and that included this little 250-watt heater. I plugged it in had no problems whatsoever, and the display measured exactly what the unit was drawing. Now, many of you use these in RVs campgrounds or eating things like tiny houses.

So, being able to run high-wattage appliances can make a real difference, and as they prep the coffee, and got everything together, I finally got to turn the unit ON and waited to see what would happen. I really expected something to go wrong at this point, but instead, the thing just did its job. The coffee maker was drying about 650 watts, and you’ve got to keep in mind, two heating elements inside this machine.

There’s one that boils the water to make the coffee, the second element is running a little hot plate. That’s underneath the glass carafe, but after a few minutes, you can see, I just saw steam coming out and the coffee came out just fine.

I wanted to do an even bigger test, and I’m gonna start with this. This is a blue thermal electric cooler. It plugs in using a standard cigarette-style plug. It only draws about 60 watts, but these things are really handy, and you might use them in a tiny house, or a campsite, whatever you put inside will stay cold using that thermal electric fan on top with the thermal cooler running.

We want it to do something even bigger, and it doesn’t get much larger than an electric hot plate. Now,  the single-burner unit draws about 900 watts, and remember, we can only run 1000 watts maximum. So, doing this test should really see if this thing can do what it’s supposed to, and you can see in the display were drawing 60 watts DC, and about 900 watts AC.

So, this is a huge draw, and we’re almost at maximum output, and this wasn’t just some fake test. I wanted to see if I could really cook. So, I broken a pan and decided I’d make some eggs, and see if this thing could actually get the job done. This test for the eggs was perfect because he never made eggs. You’ve got to cook them slowly if you want them to come out good, and I wasn’t gonna brush anything because I wanted to make sure the Bluetti would work.  If you do this test yourself, you’ll get the same result, and this brownie had to run for a while, and it took a little time for the eggs to cook, and they ended up coming out really well.

But, the most important thing of all was to look at this even after making the coffee, the eggs, and this thing was running in total for about an hour. I still had only dropped about one bar and power. So, that’s a really good, real-world example. I had such a good time doing that test that I wanted to do one more,  and that was to see how portable the battery generator really was.

Maxoak Bluetti Eb240 Review – So, Kyra and I drove down the beach. We took all the same equipment that you saw, and we hooked it up inside of my truck. Now, I know cooking inside a vehicle probably isn’t the smartest thing. This is kind of a real-life situation and considering it was almost 35 degrees outside. It was really too cold to do this, and another way what do you think and with Kyra’s seal of approval.

I have to say, I was completely amazed by how well this worked. I fully expected the coffee maker of the hot plate. We’re just gonna trip something inside, and it would break down but that never actually happened. But the even more important part is, if you’re gonna use this for an RV, a camper a living off-grid, this thing could really work, and it’s one unit you just have to buy one.

It is everything inside from the controller to the watt-hours you want. Now, these are not cheap and they are about $2000 dollars. But if you compare that with other ones, it’s actually pretty well priced,  considering the runtime. so I hope you enjoyed this article, got you to see something you may never have seen before, and most importantly you got to see a real-world use for something, and that’s what matters.