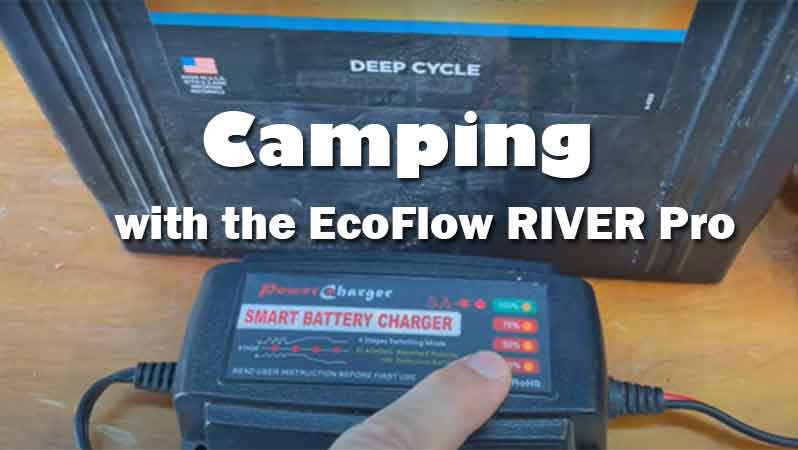 Camping with the EcoFlow RIVER Pro Power Station – Here’s the scenario, you want to go kayak camping, and you want to get a long way away from everybody else. So, you can get to some unpressured fish. So, you use your trolling motor but what happens at the end of the day, your battery’s dead, how do you fix it?

Well, I’ve got a potential solution for you. Stay tuned if you’re a hardcore angler. You hate fishing around other people, you want to get out where there’s been no pressure. The fish have never seen a war, and you’re all by yourself, or maybe with a buddy, and or a couple of friends. So, kayak camping may be something you’re thinking about.

Doing pop your trolling motor on the boat, get a good battery, and then blitz out to the far unknown. Well, the problem is, once you get there, and you’re all set up to camp for the night, what happens to your battery? You probably blew it out with all the motoring. You did to get away from that pressure and it’s close to being totally empty. How do you recharge it? Well, I’ve got a potential solution that I’m going to test out.

So, I was out today, doing a big recon here in the spring, and according to the tester, this thing is only at about one-third of a charge. So, I’m going to recharge it, and I’m going to use the Ecoflow River Pro power station to test it out. This thing is actually pretty cool. It’ll charge up to 10 devices at once, it’s got three AC outlets.

If you forget to charge it up on the way out to the launch, you can actually plug this into your car, and charge the unit as you go. It’ll kick out 600 watts, and it has a surge capability something they call x-boot that’ll put out 1200 watts. And one of the ideal things is, that this only weighs 15.9 pounds. So you can throw it in the front of your kayak, you can have the battery in the back, and it’ll help balance you out.

So, what I’m going to do is the scenario I’m testing because you obviously want to check this stuff out before you go. I’ve got my 5 amp trickle charger here, I’m going to hook it up to the Ecoflow. Hook it up to the battery, and see how long it takes to get this thing back to full charge. Ideally, it should be in a time frame that’s equivalent to overnight. But I’ll come back, and check on this every couple of hours, and see how this is. Because my trickle charger will show me when this is at 100 percent.

So, all I have to do is turn it ON. The AC power is on, right there I’ll hook up the trickle charger, and then we’ll get going. You can see my trickle charger is starting to charge. According to it, this thing was only 25 charged, 25 or less, and it’s cranking away.

Let’s look at what Ecoflow is telling us. The Ecoflow right here is telling us that at the current draw, it’s got 11 hours worth of power left in. That should be plenty to get this charged up overnight. It’s currently pulling 72 watts which isn’t much, and if I needed to, I could plug in some USB devices here, and charge those at the same time.

Another cool feature is, it’s got a little light here. So, you’ve even got a little light for your tent, or your campsite. Well, let’s this go, see how long it takes. I’ll come back and check on it. I’m just gonna move it into my shop because this is going to take a little bit of time. I forgot to mention something, something important if you’re going kayak camping, and you want to get as far away from stuff as you possibly can.  This is my pulse width modulator. I use it to control the amount of draw on my battery, and that extends its life, which means I can get farther away from that pressure.

EcoFlow RIVER 600 Pro Portable Power Station
Price: $649.00
3 x 600W AC OUTLETS AND 720Wh CAPACITY The RIVER Pro can power up to 10 devices simultaneously with multiple outlet options, including 3 pure sine wave AC outlets. It offers up to 720Wh power and it weighs just 15.9lbs, which makes it a portable power source for adventure on the go.
View More Details
View On Store

So, here’s the set of videos I’ve got on how to create one of these and hook it up to your motor and your battery. In the meantime, Ecoflow is cranking away. Well, we’re about two hours in, you can see, it’s up to 50 charges. It’s working on getting up to 75, and my system still has 8 hours worth of power left, and we’re pulling 73 to 74 watts, four and a half hours in.

It looks like we’re almost topped off, just a little more to go cranking out at 77 to 78 watts. There you go,  totally topped off, successful test. All right, I now know that the EcoFlow will fully recharge my kayak trolling motor overnight, and I can enjoy a full day of wandering around looking for those fish that are just waiting to be caught because I’ll have a fully capable trolling motor to get me there. And then eventually, get me back to the launch.

Now, I did learn a few things when I was recharging this. It has something called quiet mode, if you have it in quiet mode, it’s going to take a very long time to recharge. In my mind, it’s kind of equivalent to a trickle, but it does have the technology to fully recharge in under two hours. As long as you have the quiet mode off, and the best way to control that is, to download the Ecoflow app which also controls other things to include firmware updates in this, and make sure quiet mode is set off to get the two hours full recharge time.

Camping with the EcoFlow RIVER Pro – It does also work well on other things around the house, beyond kayak trolling motors with the x-boost technology. It’ll run things really up to 1800 watts, but you need to be careful what you hook up. That’s going to demand that much power because the way it does that is it drops the voltage. So, you want to make sure that whatever you hook up, that’s going to consume that much, isn’t sensitive to the amount of voltage coming in. But I’ve run my heat gun and other things, no problem using this.

So, it makes a great thing to haul around and do things with. Now granted, it’s mostly made to run out of your car, or when you’re camping, and things like that, so the chances are, you’re probably not going to have your kitchen coffee pot out there in the back of your kayak. Waiting to get hooked up to this. So, use it appropriately, and you’re going to have a good time with it.

You can watch this video for further info.

EcoFlow DELTA Max
MSRP Price: $1,799.00 (Discount on Checkout)
If you’re looking for more power during an outage, you can connect two DELTA Pro units to the Smart Home Panel. This method gives you up to 7200W through your home circuits and provides power for 240V devices
View More Specifications View More Discount

How to use the EcoFlow Delta PRO App