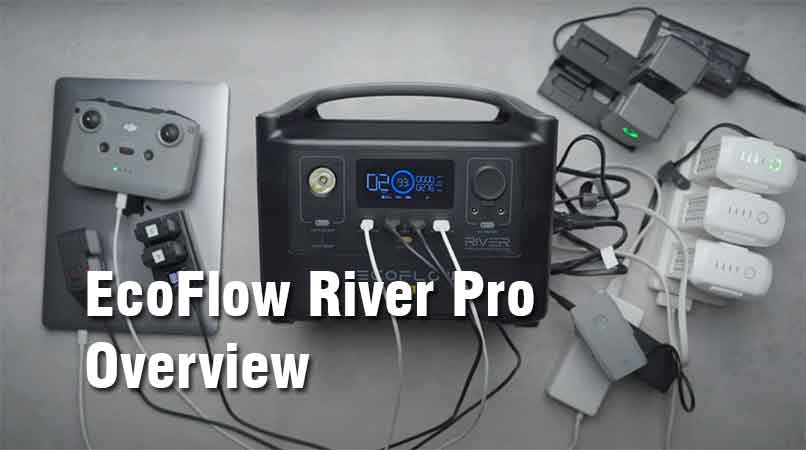 EcoFlow River Pro Overview – I’ve really enjoyed checking out these different portable power solutions because as somebody that flies drones almost every single day, bringing portable power with me is a must. Now, the drones that I fly are a little bit more power-hungry.

So, we’ve got batteries from like the Mavic 2 Pro, the air 2s as well as the Phantom 4 Pro, and you just can’t charge those off of a smaller power bank that only has USB-B ports or USB-C ports, instead, you need a full-sized AC outlet like the one you would find in the wall, and that’s why a power station like this one from Ecoflow is the perfect option.

Here’s the thing, though most of the big power stations that I reviewed just can’t match the quality of Ecoflow’s product when they reached out asking if I wanted to review the River Pro. I was genuinely excited because I thought of them, as like the apple of the big beefy power station market. In other words, I knew that what they offered in their product was top-notch.

So, something that I always run into when I’m making a video about a battery, whether it’s a smaller power bank, or a larger power station like the river pro here is, how does it stand out? What makes it different?

It’s like this is a battery. It charges my devices, and as long as I can charge my devices, it pretty much accomplishes what every single other battery bank and power station is trying to do, and I agree. I mean that’s about 50 of the equation. All you want to do is charge your devices off of the battery that you’re buying.

But I think the river pro has a couple of features. It offers that helps stand out amongst all those other power stations on the market. The biggest feature I guess, you could say of these big power stations is the IO. It’s the port selection, this determines how the power from the battery can get to your devices. So, it’s one of the most important things to cover.

The river pro here has a very diverse selection for its size with a DC outlet, three USB-a ports. One of which can output power faster as indicated with a different label, and a different color. It also has a USB-C port capable of delivering up to 100 watts of power, and now, for my favorite part the triple array of AC outlets located on the right side of the power station.

Capable of outputting 600 watts of power. It can actually reach peaks of over the 600 watts limit using what Ecoflow calls its X-boost technology. So, having three ac outlets here on the side of the river pro is really great, because I can power and charge multiple power-hungry devices at once. So, if I’m out flying in a group, I can share the power and everybody can have their own outlet as long as I’m not flying with more than three people.

But, I would say a more practical use, if you’re going to be alone and not with a group of people, is being able to charge two drone batteries at once at full speed. So, as you know, it’s like a Mavic 2 Pro battery hub, it charges one after the other, after the other, but instead, if you’ve got two Mavic 2 chargers, you can charge two batteries at once at full speed.

Now, at the end of the day, they’re just AC outlets right something that makes this special is, it has three of them. But what I also like about Ecoflow is, they took that very basic technology and they kind of upped the ante with their X-boost technology.

So, on their website here, it says that they can actually boost that power from 600 watts, all the way up to 1800 watts. There is one small caveat, it says that you should use devices below 1200 watts for the best product use, and if we scroll down there are actually some different scenarios, or I guess different examples of stuff.

You can power here with this device, like a blender, a television, a projector, hairdryer, coffee maker, you name it. It can be used here with the Ecoflow River Pro. Now, to give you a little bit of an overkill example here, I have a ton of stuff plugged in all charging at the same time. I’ve got my Macbook Pro plugged into the USB-C port. I have my air 2s controller, my Sony a7, 3 batteries, and my GoPro hero 9,  charging off of the three USB-A ports.

And I have three sets of drone batteries charging as well my air 2s batteries, my Mavic 2 Pro batteries, and my phantom 4 pro batteries. Now with all of this stuff plugged in, I’m outputting about 260 watts of power, and the battery predicts that I’ll be able to continue this charge for roughly two hours. Now, look two hours of charging, really isn’t all that much, but remember, we were sucking out a serious amount of power all at once.

So, we had all the USB ports filled up. We had all the AC outlets filled up, and I think the only port that we didn’t use was the DC outlet. But nonetheless, it’s got a serious amount of capacity or a serious amount of energy stored inside. It’s a 720 watt-hour battery, and with that, it can get me anywhere between 12 to 15 extra flights.  So, 12 to 15 charges depending on the drone that I’m flying.

It can also charge my Macbook Pro, well over 10 times, and as for those smaller personal electronics, like a phone, a camera, or even an action camera, we’re talking between like 40 to 60 recharges. Now, keep in mind, that your mileage may vary with the devices that you personally own. But, just know that there’s a serious amount of power stored inside of this battery.

Now, to take a deeper dive into this screen the LCD panel features. A lot of the information that we’re used to seeing on other power stations, like the input and output power measured in watts, the remaining capacity left, measured as a percent.

But what I really like that eco flow does that I haven’t seen in any other power station is, this countdown timer, where it measures how much power you’re using, how much power you’re putting back into the battery if any, and the remaining capacity to give you a rough estimate of how much more charging time you have left with all of those included variables I just mentioned.  It makes figuring out how much more you can charge. A lot easier with just a simple glance.

Overall, the build quality of the River Pro is top-notch, like I mentioned in the beginning. Ecoflow made a really great product here with the river pro. It is relatively heavy, but I don’t know what you’d expect from a large 720 watt-hour battery, regardless they used high-quality materials and plastics when building it.

It’s an all-around well-built device battery power station. It’s well built. The one thing I do want to mention is, that there is an expansion port on the side. It almost resembles that of a DVI cable found on older monitors, and older computers. So, if you want to plug in even more power to charge your devices,  you can, but with my needs, I’ve found that the power inside of the battery itself all 720 watt-hours is perfect.  But, you might have higher power needs, power hungrier needs, so you can add more power if you need to.

How do you charge the power station itself? Well, there are three different ways, you’ve got the wall, you’ve got your car, as well as solar. Now, you’d probably expect a battery of the size to take forever to recharge, but it’s actually really quick. Ecoflow calls this their extreme charging method which is capable of charging the battery from zero percent all the way back to 80 in just one hour from your wall through an AC outlet to get a full 100.

It’ll take about an hour and a half, which still really isn’t bad at all. Now just to sort of catch, there are two major features that Ecoflow has put into their power stations that I would say make them stand out amongst the rest. One of which is the x-boost technology, and the other is the x-stream charging capability.  It’s funny how they call it x-stream.

EcoFlow River Pro Overview – So, basically, we’re able to output more than 600 watts from the AC outlets and we can charge the battery up really fast. Those two things in my opinion make this a much better buy than some of the other power stations on the market. Because it just overall makes it more usable.

And that’s something that you really want to consider when thinking about picking up a battery station,  and or power station. I think that this battery here, the River Pro from Ecoflow is the best that you can buy. So, if you guys are interested I’m going to leave a link down to pick this up. You can also check out some of these smaller river power stations if you don’t need all this power and you want to save a little bit of money.