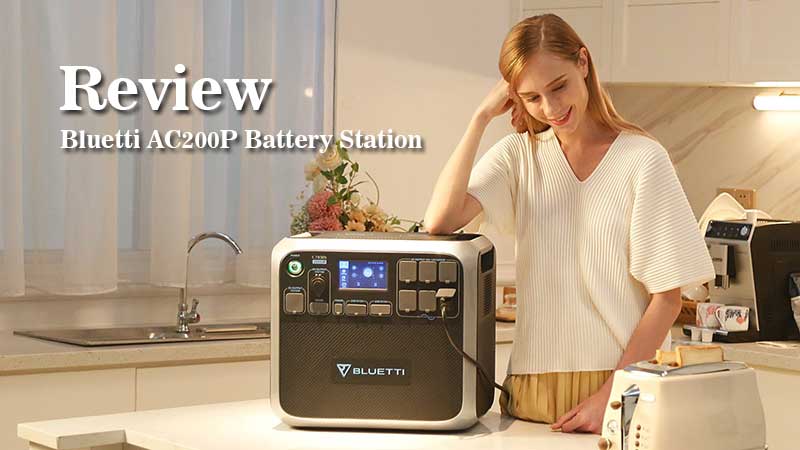 First off, you can see this gigantic battery adapter which is your home charger. This thing is gigantic. This is a very large battery. So, it does need a large power source. This is just your typical standard cable plug it into your wall, plug it into the battery station, and you are charging. So, that does come with the battery station, and then it comes with a nice drawstring bag with some more goodies inside of it.

We’ll take a look inside of here. We have some cables for the solar charger, and for the 12 volts inside of your car. So, they’re bound together with this nice little velcro strap, which keeps everything nice and organized with the Bluetti branding on it. So, that’s quite nice here. We have a cable to charge it with your 12 volts from your vehicle.

It plugs into the side of the battery. It does include that you then have another battery cable here. We’re going to talk about this in just a little bit. I want to set that one off to the side for now. This is your standard MC4 solar panel connector, so you can attach this to a large solar panel and then run it into your battery unit.

Okay, so coming over to the side of the power station. You can see that there are two inputs here, one input is underneath this little rubber door. That is your standard plug from your household adapter that could be plugged into there, and then this cable, that I was just talking about instead of. We’re gonna hold off on this for a second.

This is a locking adapter, so you do have to push down it. It is spring-loaded and it locks into this secondary input right underneath of that rubber flap, and then it comes to this yellow connector which you can plug in your solar panel wire directly into that, or you could plug in your 12 volts input for charging from a vehicle plug that into that adapter.

And like I said this adapter then connects onto there, and it’s a very secure connection, and that allows you to charge it. Now, I will mention, you can actually charge this battery in two different methods at the same time. You can plug your wall adapter into the battery, or your 12 volts, or your other solar panel directly into that input.

You can also run more solar panels, so that means, you can actually plug this into your house, charge it,  and then have one or two solar panels outside also, plug it into that adapter and draw power from both sources at the same time which will speed up the charging process.

So, having a closer look at this adapter here, you can see, it is a two pins adapter. There are two small ball bearings on there, and there is a red dot on the top. There’s really only one way to connect this and it does lock in with this connector. All you have to do is press it in, pull back on the tab line that red dot up on the top. And it does lock in there very securely.  We have the adapter for the household input, very simple and straightforward, both have rubber flaps for protection from dust and water.

Having a look at the top of the battery unit, you can see that there are two wireless charging pads, one on the left, one on the right. They both output 15 watts each, and they can both be used at the same time, or one separately to charge your cell phone, or other compatible devices that work with wireless charging.

Okay so coming in close at the outputs of the battery. You can notice that everything is covered with a nice rubber door.  We’ll start over on this side with a sine wave AC output of 100 to 120 volt, 2000 watt output. These are all standardized household plugs, all covered with rubber doors. So, we’ve got six of those in total which is very handy for such a large battery unit.

You can watch the video for further information.

I’ve been using it so far. I’ve been using it in the truck, camper to run big items, my refrigerator, a fan,  lights, all kinds of things, and it has worked tremendously. Well, I have not charged it with a solar panel yet because I do not have a large enough solar panel. To do so, so I am charging it at home with the plug one time, and I can go for four or five days with this, and not worry about recharging it.