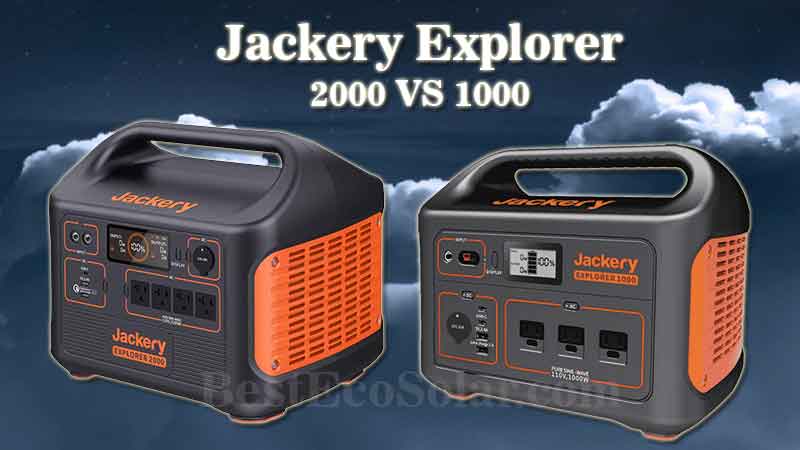 Full Review Jackery 2000 vs 1000 – So, what you see right in front of you are two portable power stations. The bigger one is Jackery 1000 and the smaller one is Jackery 240. This is an unbiased review.  So, I don’t have any bias towards Jackery just wanted to throw it out there. But, based on the research that I did, you know, I did look at some other competitors and found out that Jack, we kind of fit my needs and it did exceed my expectations with the last winter freeze.

We had about a couple of months ago here in Texas. This was a lifesaver, it kept the fridge running,  coffee machine, instant pot, you name it, a lot of the appliances. It did keep running. So, Jackery making a great product.

So, today’s article is looking at their newest unit that they released a couple of months ago. The Jackery 2000, and once again, these basically, these numbers are kind of reflective upon the voltage that they have. For example, Jackery 1000 has 1000 watts, and the way you recharge. These are you can either hook them to the wall or charge them using the solar panels. Lastly, you can also charge these using the DC input in your cars.

So, let’s get into the fun part of looking at the newest model from Jackery. The Jackery 2000. So, it’s a pretty heavy unit. I should say weighs about 43 pounds, as opposed to the Jackery 1000 which pays about 21 pounds. Let me get this thing opened up, the first thing that you see when you open. This is a case which is where you would put in all your power supplies, your power adapters, and the adapter to hook the power station up to the solar panel.

So, I’ll put this on the side. All right, so now it’s time for the thing to come out. So, as you can see if you’re doing a side by side comparison here like I said the weight is almost double. It is a heavy sucker, you know part of the reason why. It’s because this is powered through lithium-ion batteries, and you know the laws of physics apply here. So, the more number of lithium-ion cells you have, the more are obviously going to be weighed.

So, some of the key differences between 1000 and 2000 other than the wattage is, what you see right in front is these LCD displays. If I were to turn this ON, basically, it’s showing you. It has about 29 batteries, I did not charge this unit. This is how it came from the factory. So, it’s good that they do provide some charge, and you’ve got four AC inputs 110 volts.

It’s a pure sine wave technology, you’ve got a DC input, and then we have some USBs and some inputs for the solar panels. As opposed to the older model which is the Jackery 1000, you can see the display. Let me take the sticker out, so it’s kind of the older style display. This is basically where you know, where you can see, how much wattage the unit has left.

Now, this is a hundred percent or because I’ve charged this, whereas this one, there’s nothing being drawn. Drawn from here, in terms of wattage. So, that’s why you see that the output is zero watts. So,  that’s also a little about these two units. Now, as I said, when I did a test on Jackery 1000 some of the results that I got was, this was able to run the instant pot for about an hour and 30 minutes.

And now, we’re talking about an 8 quart instant pot, and then my refrigerator. It’s a full-size refrigerator, so this one the Jackery 1000 was able to power that for about 12 hours, and then I also did a test on the Keurig of the coffee machine. It ran for about three hours and the reason why it’s so low is that anything that generates electricity heat sucks in a lot of power from these portable power stations.

And then we also have tested on 700 watts microwave oven, which is about an hour or so, and I will continue to run these tests on the Jackery 2000. When Jackery released their 1000 mah model, it was sort of meant to where it’s the camping community people, who or if someone wanted to have this, or sort of an emergency power backup for their home in case of a power outage.

But it was definitely kind of geared towards the outdoors, whereas I think this one is kind of in line with the home, like home emergency use for your house in case of a power outage. And partly the reason is that this does weigh a lot like I said 43 pounds. So definitely, a pretty heavy unit to be hauling around,  and other than that, it’s the ergonomics.

I like it, the carry handle that they provide, it’s a lot easier and there’s also a tiny flashlight on both of these units. so you see on the front here, not that you would use these heavy flashlights, but it’s just something to kind of navigate your way around during the power outage. That’s a little something about Jackery units. Now, as far as the solar panels go, I do have solar saga panels here.

Basically, what you see here, is the Jackery 100 watt solar panels, and I have two of these. So basically, what you can do is charge the Jackery 1000 using these panels, and it will roughly take about 8 hours. I know Jackery also released their newest 200 watts solar panels to go with this Jackery 2000. And according to their website, it’s able to charge this to 80 in about 2.5 hours.

I think that’s pretty awesome, compare if you’re talking about four of those 200 watts panels. Other than that, again I just received this unit last week. So, I haven’t really done a deep dive off of this unit, in terms of testing. But, I do plan on using these, in case of a power outage, hurricanes, naturally any other natural disaster like a winter freeze.

Full Review Jackery 2000 vs 1000 – So, this is definitely a great investment, to say the least, and I think everyone, every household should have some sort of portable power station. Because you just never know when the grid is going to go down. That’s all for today folks,  if there are any questions, please put them in the comments below.