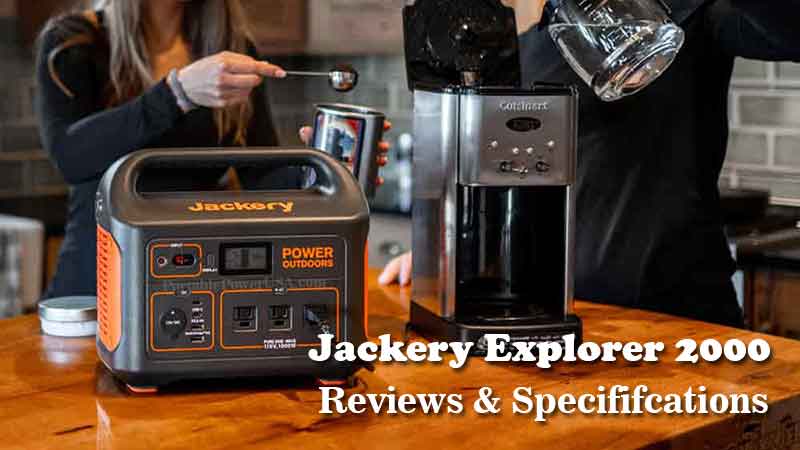 Jackery Explorer 2000 Review – In today’s article, we’re going to be doing a deep dive into one of the portable power stations that I have. It’s the Jackery 2000 there, and before I get any further, quick disclaimer Jackery did not sponsor this. This is a completely unbiased review, there’s a lot of great stuff out there, not just Jackery, there are goals there with Bluetty and Titan.

I think every household should have some sort of portable power station because you just never know when the grid is going to go down. And some of these units are so high in demand right now. You’ll be surprised that this particular unit, Jackery is still sold out of them.

Today, we’ll also be doing a demo. So, I’m going to be plugging this unit into my appliances like a refrigerator, a Keurig coffee machine, toaster oven, and we’ll be sharing those results in real-time. That way you will have some accurate data to look at and compare.

I’ll continue to do some tests on the tracker 2000. And how it compares to the Jackery 1000, and why am I not surprised because, whatever the Jackery 1000 could do, the Jackery 2000 is basically double that. So, you know 1000 watts, 2000 watts you get the point, for example, the fridge refrigerator.  The full-size one that I have by LG.

The Jackery 1000 were able to run it for about 11 hours, 23 hours on the Jackery 2000. So, a little less an hour, and again the refrigerators, the way they work is if the compressor is not on at all times. It won’t draw peak power. It’s going to be steady and then, once the compressor is ON, and then it’s going to go up fluctuate.

It’s going to draw more power. That’s how you can get more use out of your refrigerator. Especially, if it’s an energy-efficient refrigerator. Now, I’m going to be taking to a real quick demo.

We’ve got this Jackery 2000 portable power station. I’ve got a surge protector that’s plugged into this, and if you see on the back, on the surface protector I have got my full-size refrigerator by LG. It’s a pretty smart energy-efficient refrigerator. I’ve got a Keurig coffee machine, I’ve got a hamilton beach toaster oven, and I’ve got also got a 700 watts microwave oven.

If I were to look at this display, it’s only drawing about 23 watts, probably because the compressor is not on right. So, as you can see, it’s basically saying that it will keep this refrigerator running for about 41 hours. Now, as I said before, you know whenever the compressor will peak, you know it’s gonna draw a lot more power. That number is going to go down, but let’s try to increase the draw.

So, what we can do here is I’m going to be making some coffee. So, as I’ve stated in my last article, anything that requires that uses electricity to generate heat uses a lot more power. Let’s say if I were to brew some coffee here, so now we’re kind of pushing them. We’re actually drawing about 600 or 1100 watts, that’s how you can tell.

And I’ve also got some bagels here, that we can use a toaster oven. Now, you notice it’s gotten up to 2000 watts, it came down. So, as you can see, it’s kind of fluctuating here and there. Now, what I’m able to do is, I’m able to run all these devices, and I haven’t even turned on my microwave yet. Let’s say if I were to turn the microwave oven, there’s some popcorn inside, again if I were to get back on the display, it’s actually jumped to 3000 watts, came back down to 2000.

So, as you can see, it does have a peak of more than 2000 watts. This kind of gives you a good picture, what the Jackery can do.

Jackery Explorer 2000 Review – In case of a power outage, we want to make sure that we have our refrigerators running because food can get spoiled. You don’t want that, and microwave is like a necessity. So, if you want to boil like warm water or something anything like that, or cook for food. Microwave is definitely a go-to, and the same thing with the toaster oven.