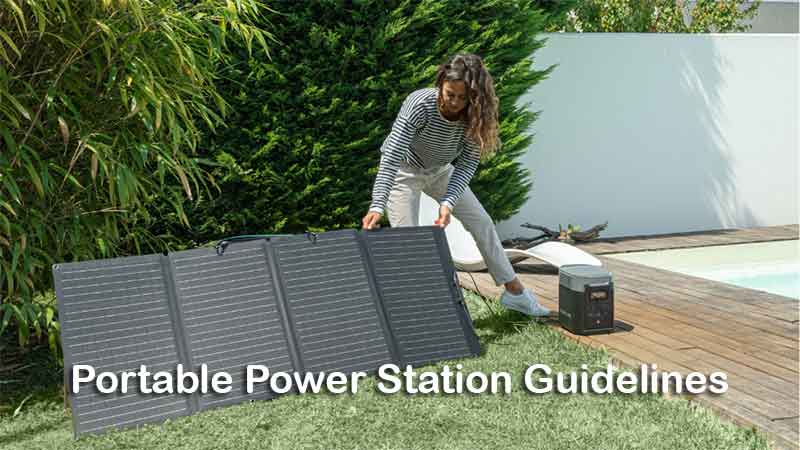 The first and probably most important thing to know is the power or wattage that the portable power station needs. Now, I have a table that goes over some of the more common devices and how much power it needs. You can check this out I have a link posted below if you want to look over that but I could basically divide things into five different categories of needs.

The first category would be camping or just charging cell phones or laptop batteries or something like that. If this is what your needs are, then a portable power station within the range of about 100 to 300 watts will work fine. In fact, any portable power station will work fine for this your phone and your laptop. They don’t require a lot of power.

I think right now, most laptops use less than 100 watts of power, and some are more. But if all you’re doing is charging devices then you can get one of the cheaper portable power stations.

The second category I want to talk about is kind of like portable entertainment. Say, for example, you want to go outside put on a projector, have speakers running, and have your computer plugged in. So, this is where you’re plugging in multiple things to the portable power station, and you need a little bit more power. So, for this, I would say you need to be within the 300 to 700 watts range. This would allow you to plug in multiple things at the same time, and have them work for two to three hours.

C. For power tools or in a workshop

Portable Power Station Guidelines, the third category is if you are using this for power tools or in a workshop or something like that. For this, you need to be in about the 700 to 1100 watts range. This is what I personally use the portable power station for the most. I have an air compressor that uses about 700 watts of power, and I have a miter saw that uses just over 1000 watts of power.

So, for power tools, some of the smaller ones can be 700 or 800 watts. Some of the larger ones need to be just above 1000 watts of power. If you get anything smaller than that, it’s just not going to work.

And the fourth category I want to talk about is if you are doing RVing, or van life, or bus life, or something like that, where you have different things like a microwave, or a tea kettle. Basically, for any appliance that uses a lot of power for this, you need to be in about the 1,100 to 1,600 watts range. Microwaves usually use about 1,000 to 1,200 watts of power. Kettles can be even more, they can be about 1,500 watts. So, if you need to power appliances, you need to get one of the more expensive, higher, end portable power stations.

I’ll briefly mention kind of the last category which is if you want to back up your house or use this for home emergencies. Realistically, you’ll need something really powerful, I would say about 1600 watts or more. The reason for this is that in emergencies, you may need to power things for a really long time, and you may need to power heavy appliances to heat up food or something. So, you may need to use a microwave, you may even want to use it for AC or heat, depending on what your weather conditions are.

If you have a large portable power station, that’s like a thousand watts, but you can only charge at about 100 to 150 watts, it’s going to take a really long time. Some of the larger portable power systems have a higher max input. Have one that has a max input of 400 watts, and you can charge this thing in just a couple of hours. It’s amazing.

So, you need to know the max input. If you have need for charging something really fast, another thing you need to know about the input for your portable power station is if it has overload protection. I had one of the less expensive portable power stations, and I decided that I’d plug in two solar panels to it, and completely fry the thing. Because it did not have overload protection.

If you have a portable power station for a van, car, or RV, and you want to plug it into the cigarette adapter, that is also an option. It’s usually quite slow. And one thing you need to be aware of is when your car draws more power, the alternator has to spin faster to supply that power. That means you’re using more gas. I don’t think it’s substantial, but it’s still something to be aware of.

On the top of my shed, I have two solar panels mounted. And one thing you need to be aware of if you have more than one solar panel is, whether you want to connect them in series or in parallel, if you connect them in series, you’ll have a higher voltage and one of the advantages of this is that you don’t need as much wiring. It’s a lot easier to wire up. One of the major disadvantages of this is if one of the solar panels is in the shade, then it’s going to affect the whole series of solar panels, and it will all be much lower.

Now, if you connect your solar panels in parallel, you’ll have higher amperage with the same voltage. This is a much better setup. If one of the solar panels is going to be in the shade for part of the time, one of the disadvantages of this is, you will need to get some adapters. And if you use several solar panels then you’ll probably also need to get the thicker wire.

The third main thing you need to know before purchasing a portable power station is what type of battery you want to use. Right now, there are two main types of battery, you’ve got lithium ion, and then you have lithium iron phosphate or LiFePO4. Each portable power station or battery that you get, has a number of life cycles or charge cycles. Basically, a charge cycle is what takes it from 100 down to 0%.

Realistically, most of the time, you don’t use a battery that way, maybe say you use it from 100 percent down to 90 percent, and if you do that 10 times that’s also a single life cycle. Currently, the most common type of battery is lithium-ion. Most of my portable power stations are these lithium-ion batteries. Generally, have about 200 to 300 life cycles before they start degrading.

Another disadvantage to lithium-ion batteries is, they don’t really do well in heat. Now, I use my portable power station out in the shed. Sometimes, it gets really hot. This is something I shouldn’t be doing with lithium-ion because it’s going to decrease the life of that battery much faster.

The main advantage of lithium-ion is its capacity. It’s much smaller. So, with portable power stations, you generally want them to be portable and that’s why a lot of these portable power stations are lithium-ion because they are a bit smaller to tow around. For the power that you get, now with LiFePO4 batteries, you can expect about 1,000 life cycles or about 10 years before the capacity is significantly decreased. So, obviously, this is a major advantage. It also does much better in the heat.

Overall, this is the battery that I think most people would recommend for a portable power station. The main disadvantage of this, however, is that it does have a larger size. I must admit, I only have one portable power station which is LiFePO4. So, I’m not totally experienced in this area. I think these might be a little bit more expensive as well. I’m not sure if you have any experience with this type of battery, please write a comment below and kind of share with us your experience with the LiFePO4 battery.

Portable power station guidelines, the fourth thing that you should pay attention to before purchasing a portable power station is the display. Most displays are more or less the same. They kind of have a percentage of how much power you have left, but there are some that are definitely better than others.

If you’re using a portable power station as an inverter, or UPS, honestly, the display probably doesn’t matter too much. Because you’re just gonna leave it plugged in all the time, and you just need it for emergencies, so it doesn’t shut off important devices. If however, you’re doing construction, or you have an RV, and you need to know exactly how much time you have left, based on the power you’re using, then you want to look for a display that shows the hours and minutes remaining.

I have one portable power station that comes with a car jumper. So, if the battery on your car is dead, you can use that to jump-start your car. I actually find this incredibly useful, and if you’re looking to get a portable power station for something like a van, this is something I would definitely recommend you look for it. in case something happens with your car battery. Another feature is overload protection.

If you’re using solar panels, definitely, look for this. Wireless charging is something that a lot of portable power stations have. If you have a phone with wireless charging capabilities, this is good to have.

Here are some recommended products which you can choose in our store for portable power station guidelines: